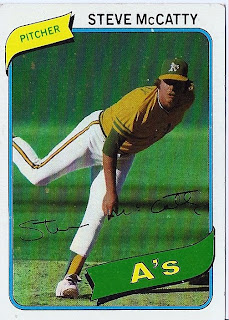 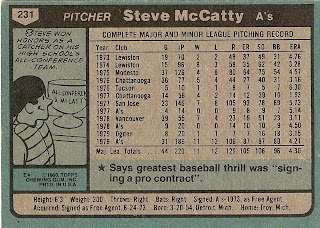 Who is this player?
Steve McCatty, starting pitcher, Oakland Athletics
In his second full season in the major leagues, Steve McCatty was one of the fabled "Five Aces" that led the Oakland A's into contention in 1980. With the notorious Billy Martin as their manager, McCatty teamed with Mike Norris, Rick Langford, Matt Keough and Brian Kingman to form a starting rotation that was the envy of every team in the game. The A's finished in second place and the righthanded McCatty contributed 14 victories, eight in the second half to keep the A's in contention.

A native of Troy, Michigan, McCatty signed with the A's as an amatuer free agent in 1973. He spent several years in the minor leagues pitching as both a starter and a reliever with brief looks at the major league level in both 1977 and 1978. As the A's decended into the cellar of the AL West, McCatty was given an opportunity that he took full advantage of in 1979. He earned a spot on the pitching staff in in May and began his season 4-0. The hard-throwing McCatty won 11 games for a team that won only 54, pitching eight complete games and leading the team in ERA.

McCatty notched his best season in 1981. As the A's cruised to a playoff spot, Steve led the American League in victories and shutouts. His 2.33 ERA was third in the league and he finished second in the Cy Young Award voting. He pitched a complete game victory in Game 2 of the AL West playoffs against the Royals, but McCatty and the Yankees did not fare as well in the ALCS, losing to the Yankees in three games.

Known as a practical joker, McCatty once set Martin's shoelaces on fire at the moment the manager was giving the sign for one of his celebrated Billy Ball suicide squeezes. But the fun was over for McCatty in 1982 as he began to suffer arm problems. Not wanting to lose his spot in the rotation, McCatty pitched through the pain, which turned out to be a knot in his rotator cuff. He did not have surgery and slowly worked his way back into the A's starting rotation by 1984. Injuries persisted and his ninth and final season in the majors was 1985. He signed a minor league contract with the Chicago White Sox and pitched in the minors for two years (1986-87) before finally retiring.

Today, McCatty is the pitching coach for the Washington Nationals, a position that he assumed in June of 2009. He had previously spent several years coaching in the minor leagues and most recently at the major league level with the Detroit Tigers in 2002. Still residing in his native Michigan, McCatty also spends the offseason as a private pitching instructor with Jason Thompson Baseball.

Why I love this card
I had mentioned previously that there are several cards in the 1980 set that remind me of the day that my Grandpa died. Sorry for the downer, but McCatty one that I distinctively remember pulling from a pack that day. Even now, whenever I see or hear about McCatty I think of Grandpa.

Something else....
From Wikipedia: During in a 1982 exhibition game against the San Diego Padres, McCatty steped to the plate wielding a toy 15-inch bat but was refused by umpire Jim Quick to hit. McCatty was instructed by A's manager Billy Martin to use the toy bat as a protest, who was furious that the DH rule was not allowed in National League ballparks.

On this date in 1980:
After six seasons on NBC, the final episode of "The Rockford Files" aired. While still a ratings success, the show was cancelled due to the health concerns of star James Garner, who was suffering from bad knees and back as well as an ulcer.
Posted by Dean Family at 9:50 PM