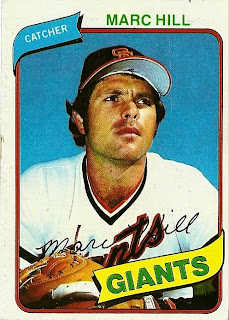 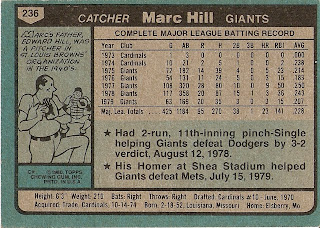 Who is this player?
Marc Hill, reserve catcher, San Francisco Giants
After a little more than six seasons as a catcher for the San Francisco Giants, Marc Hill was sold to the Seattle Mariners on June 20th. The righthand hitting Hill appeared in only 17 games for the Giants before switching leagues. He backed up starter Larry Cox and provide excellent defense to a young Mariner pitching staff. He was offered a one-year deal by the Mariners after the season as a free agent but Hill rejected the offer. When the year ended with no teams looking for his services, Hill finished 1980 concerned that his career may be over.

The son of a former St. Louis Browns farmhand, Marc Hill was drafted by the St. Louis Cardinals in 1970. His defensive prowess earned comparisons to Johnny Bench but his bat never followed suit. He made his major league debut on the final day of the 1973 season as St. Louis allowed two hits in a 3-0 win over the Philadelphia Phillies. He appeared in only 10 games in 1974 and with Ted Simmons and Tim McCarver ahead of him, he was traded to the San Francisco Giants.

It was by the Bay that Hill earned a spot as a starting catcher. He was the Giants regular in 1977 and 1978, when the surprising Giants challenged for the NL West title. However, a broken wrist in 1979 cost him his job that he never reclaimed. Typically the eighth batter in the San Francisco lineup, Hill's defensive abilities were his strongest assest. He was an intellegent catcher, calling good games and possessed one of the more feared throwing arms in the league. He was also lauded as an excellent teammate and a great influence in the clubhouse.

The Chicago White Sox signed him in February 1981 and he stayed in Chicago for six years, primarily as Carlton Fisk's backup. He was a member of the 1983 AL West division champions, but did not appear in the post-season. He was known throughout his career as "Booter," a nickname given to him by former teammate Willie McCovey who opined that no one had heard of Marc Hill, but they'd heard of Boot Hill and Bunker Hill. McCovey merged the two into "Booter Hill."

Hill played his final game in 1986, squeezing out an impressive 14-year major league career. He immediately became a manager in the minor leagues and eventually served on the coaching staffs of the Houston Astros and New York Yankees. Hill managed the Peninsula Pilots to the Carolina League title in 1992 and then managed several other minor league teams until 1997. He briefly returned to managing in the Frontier League in 2003. After his managing days, Hill also worked as a landscaper at Lovelace Tree Farm.

Why I love this card
In retrospect, what I have learned about Hill contradicts what I thought about him at the time I got this card. I thought that he looked so angry and irritated. It confused me that a guy so lucky to be in the major leagues would be so upset about it. Quite the contrary, as Hill was one of more affable players in the game and actually a prankster. You have to love a guy that considered it a duty to give hotfoots. Or is it hotfeet?

Something else....
Often times, Hill was mistaken for fellow Sox LaMarr Hoyt and Greg Luzinski - he said he signed many autographs as "LaMarr Hoyt" in those situations in 1983. Check your autographs folks.

On this date in 1980:
In the first ever Pro Bowl in Hawaii, the NFC defeated the AFC 37-27 behind MVP Chuck Muncie of the New Orleans Saints. Muncie led all rushers with 71 yards and threw an option pass for a touchdown to Dallas' Tony Hill. Here are a couple pictures from that game: 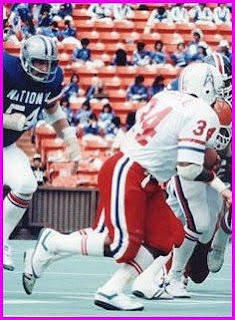 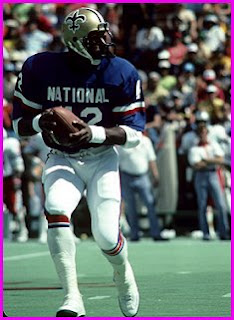