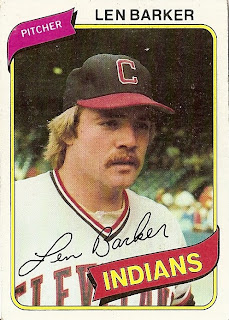 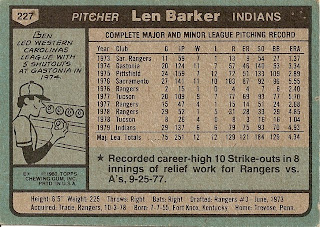 Who is this player?
Len Barker, starting pitcher, Cleveland Indians
After several seasons of inconsistent performance, Len Barker put it all together in 1980 to have his finest season. The righthander always had an intimidating fastball and he used it that year en route to a 19-win season and led the American League in strikeouts (187). The Indians' ace was particularly impressive in the second half of the season, when he went 12-5 with a 3.45 ERA and five complete games. Len finished sixth in his league in victories but also ranked in the Top Ten in walks and led the circuit in wild pitches.

Originally selected out of high school by the Texas Rangers in 1973, Barker was considered an exceptional pitching prospect. There were concerns about his control, something that would plague Barker on and off throughout his professional career. He was given a brief look in 1976 and in the two following seasons, he was alternated between starter and reliever. The Rangers apparently became disenchanted with Barker in 1978 when he struggled and was even sent to the minor leagues. He was included with Bobby Bonds in a trade with the Cleveland Indians.

He was inserted into the Tribe's starting rotation in 1979, the first real opportunity for him to start on a consistent basis. The high point of Barker's career undoubtedly came during the 1981 season, where he became only the tenth man in major league history to pitch a perfect game. You can view clips of that game here. He was selected as an All-Star that year and received the loudest ovation when he was introduced in front of his hometown fans in Cleveland. When he appeared in the game, he received a kiss from Morganna. Barker again led the American League in strikeouts in 1981, 127 in a shortened season.

A durable starter, Barker won 15 games in 1982, logging 244 innings and pitching a career-high 10 complete games. The Indians made the decision to trade Barker to the Atlanta Braves in 1983 as the Braves were looking to defend their NL West crown. At the time, Atlanta held a slim first place lead, but Barker and the Braves flopped down the stretch, failing to win the division. Barker signed a large contract with the Braves shortly after the trade who were hoping to count on him for several years to come.

Injuries and inconsistency undermined Barker's tenure in Atlanta as two of the players traded for him (Brett Butler, Brook Jacoby) became All-Stars. As the Braves sunk into the second division, Barker was unfairly singled out as an example of the team's plight. He was released in 1985 with three years remaining on his contract and spent all of 1986 at Triple-A in the Montreal Expos chain. He returned to the majors with the Brewers for his 11th and final season in 1987. Barker now lives in Cleveland area and has operated a construction and remodeling business for the past decade. He remains a fixture at Indian events and makes several personal appearances every year.

Why I love this card
Two Indians only four cards apart (the other being Ron Hassey). Not counting League Leader or Highlight cards, this is the shortest distance between two guys sharing the same team. Interestingly, the two would team up in Barker's perfect game in 1981.

Something else.....
For years, a clip of Barker had made every blooper tape ever produced. In 1978 as a member of the Texas Rangers, Barker uncorked a wild pitch that went halfway up the screen behind home plate and rolled to the edge of the roof before finally descending back to the ground. I must have seen this play hundreds of times, yet cannot find any video of it on the net. I apologize to those of you who have never seen this play, those of you who have know what I'm talking about. A boxscore of the game is here.

On this date:
Six Republican candidates for President met in Des Moines, Iowa in the first debate of the 1980 Presidential race. The candidates were: Sen. Bob Dole of Kansas, Rep. Phillip Crane of Illinois, Sen. Howard Baker of Tennessee, former Texas governor John Connolly, John Anderson, and George Bush. A seventh candidate, Ronald Reagan, did not appear at the debate, saying that it was "divisive" to the party. Reagan of course, would go on to win the presidency in November.
Posted by Dean Family at 3:02 PM