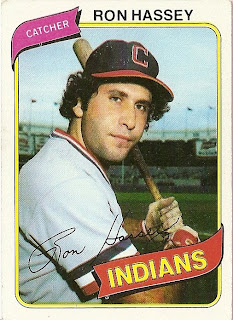 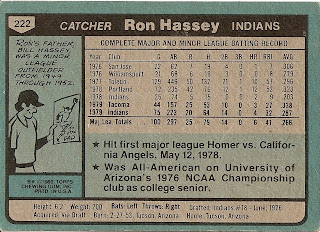 Who is this player?
Ron Hassey, catcher, Cleveland Indians
Based on a solid performance in Spring Traning 1980, coupled with an impressive end to the 1979 season, Ron Hassey earned the starting catcher position for the Cleveland Indians. In his first full season, the lefthanded hitting Hassey led all major league catchers in batting average in 1980 when he batted .310. While leg injuries would begin to take their toll on his defensive abilities, there was no doubt that Hassey could hit. At 27 years old, he was apparently part of a core of young Indians players that would hopefully lead the Tribe into contention in the 1980s.

Ronald William Hassey enjoyed baseball success at every level he played. He was part of an undefeated, state-champion in high school, and was a star at the University of Arizona where he still holds several records. Ron was also selected captain of the USA team for Pan Am Games in 1975 and the following year, he helped lead Arizona to the National Collegiate title. In the afterglow of a collegiate championship, the Cleveland Indians drafted Hassey in 1976. He batted over .300 in several minor league stops, and made his major league debut in 1978.

Hassey spent almost seven seasons in Cleveland as the Indians regular catcher but they never did become a contender. The most memorable moment during his Cleveland days was catching Len Barker when he threw his perfect game in 1981. During the 1984 campaign, he was included in the famous deal with the Cubs that sent him and Rick Sutcliffe to Chicago. Injuries prevented Hassey from appearing in the postseason in 1984 as the Cubs fell in the NLCS to San Diego. At the end of the season, Hassey was on the move again, traded this time to the New York Yankees.

Although Hassey played in 156 games over two seasons in New York, he is fondly remembered for a home run he hit on September 12, 1985. As the Yankees challenged the Toronto Blue Jays for the AL East title, Hassey had a monster three-run home run that helped win the game for New York and move them within one game of the division lead. Thanks to Youtube, that home run can be viewed here. Hassey became a journeyman player, able to find a spot on a major league roster due to his potent bat.

After a year and a half with the White Sox, Hassey spent three seasons (1988-1990) as a member of the Oakland A's. It was in Oakland that Ron had his only taste of postseason action as the A's advanced to the World Series three years in a row. He was a .323 batter during the postseason for Oakland and they won the World Series in 1989. The final year of Hassey's 14-year career was 1991 with the Montreal Expos. On July 28th, he became the only man in major league history to catch two perfect games when he was behind the plate for Dennis Martinez's perfect game against the Dodgers.

Why I love this card
We used to joke that if anyone ever 'looked' like a catcher it was Ron Hassey. In fact, whenever someone "had to" catch (since no one ever volunteered to do it) it was referred to as "Hassey-ing" or "Playing Hassey." Those terms could also be applied to a slow runner or if someone wasn't paying attention (I understood the slow runner connection, never did get the other).

Something else.....
Hassey spent several years coaching and was on Tony LaRussa's staff in St. Louis during the 1990s. He was inducted into the University of Arizona's Hall of Fame in 1997.
Posted by Dean Family at 11:58 AM