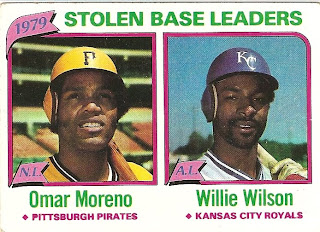 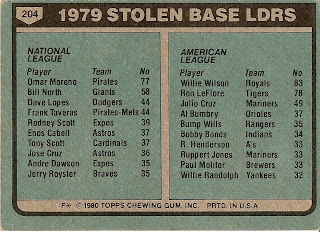 What is this card?
1979 Stolen Bases Leaders Card
In only his second full season, Willie Wilson of the Royals led both major leagues with 83 stolen bases. His total was the most tallied in the American League since Ty Cobb in 1915. Omar Moreno of the Pirates led the National League with 77.

How was the race? The only challenge that Wilson faced was from Ron LeFlore of the Detroit Tigers. LeFlore was the defending champion, but Wilson stole 14 bases the final two weeks to claim the championship. Moreno did not face a significant challenge and won the NL crown handily.

Where are the 1980 League Leaders? Rickey Henderson of the A's finished tied for seventh in the AL. LeFlore, who finished second in the AL, would be traded to the Expos and lead the National League in '80.

Did these players ever repeat? No. Moreno was two-time champion that finished second in 1980 and 1981. Wilson was one of the premier base stealers of his era, 11 times finishing among the Top Ten in his league. However, he would never again be a league leader.

Why I love this card
These leader cards continually remind me of why I love this era. In looking at the several names listed on the backs of these cards, its shows the diversity of skills on display in Major League Baseball. Sluggers who specialize in the long ball, excellent batsmen who hit for high average and burners like Moreno and Wilson who were threats on the base paths. Additionally, every team has had a player in the Top Ten so far with the exception of the Twins and Blue Jays.

Something else....
Noted on this card is the first appearance of all-time stolen base leader Rickey Henderson. Little did anyone know at the moment this card was out what a revolutionary force Henderson would eventually become.
Posted by Dean Family at 2:22 PM