The post on Steve Carlton led me to dig out my card binder to review some of my card collection. In reviewing my Carlton collection, I was reminded of the greatest snub since Marlon Brando refused his Oscar for The Godfather.

During the summer of 1980, Topps released a 60-card set in cello packs. They are about 5x7 inches and if I remember correctly, they were a dollar each and you would get three cards. I have noticed on ebay that some of the packs contained five cards, but I have no recollection of them. The cards feature a facsimile autograph on the players photo, much like the regular card issues. The backs of these cards are gray and included the players name, team, and position. There was no checklist, but the backs of the cards indicated, for example, "Card Number 1 of 60."

I remember these appearing at the 7-11 sometime during the summer and I know that between all of us, we never did figure out who all 60 players were. What we did know, was that Steve Carlton was not part of the set. Later on we figured out that all teams had at least one player, yet Carlton was not one of them. Outrage!

I completely forgotten about this set until today. There have been several players that I have already featured that had a card in the set, the most recent being Jim Rice (below). From this point, I'll include them as they come along much like the Burger King cards. I'll also catch-up posting pictures of the other players that have already been mentioned. 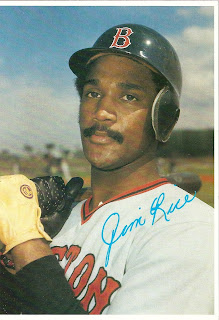