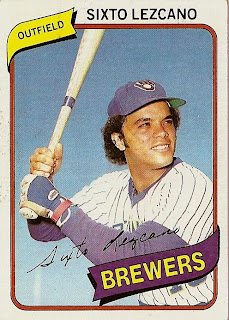 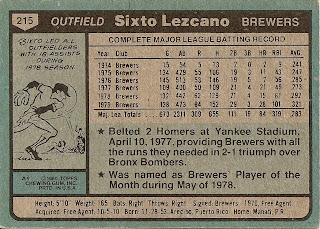 Who is this player?
Sixto Lezcano, right fielder, Milwaukee Brewers
With two home runs on Opening Day, Sixto Lezcano began the 1980 season in historic fashion. One of his home runs in the Brewers' 9-6 win was a grand slam and Sixto became the only player in history to clear the bases on Opening Day twice (the other was in 1977). However, a horrible slump ensued and Lezcano was batting under .200 well into May. He struggled to regain his stroke, and when it appeared that he had, he was struck on the arm with a pitch that ended his season. The Brewers included him in a package in a major trade that December with the St. Louis Cardinals.

Originally part of a group of young players designed to lead Milwaukee to prominence, the righthanded Lezcano was signed as a amateur in the Brewers first season, 1970. He made his debut in 1974, along with teammate Robin Yount. The following year, he earned the starting position in right field and would remain a fixture there for six seasons. Like his childhood idol, Roberto Clemente, the Puerto Rican born Lezcano displayed a strong throwing arm, leading the league in assists (1978) and winning a Gold Glove (1979).

1979 would prove to be Lezcano's most productive season at the plate as well. While batting .321, Sixto was third in the AL in slugging percentage and fourth in on-base percentage. He hit 28 home runs and drove in 101 for a Brewers team that won 95 games and was poised to challenge for the AL East title. When the Brewers slumped in 1980, management decided it was time to shake up the team. Lezcano spent only one season as a Cardinal as he was promptly traded again, this time to San Diego as part of the deal that brought Ozzie Smith to St. Louis.

Lezcano had a good 1982 season with the Padres, but the team was largely forgettable and Sixto's performance (8th in the NL in OBS+SLG) was largely overlooked. The following year, he was traded for the third time in four years, this time at the August 31st trading deadline to the Philadelphia Phillies. He helped the Phils reach the World Series that year, hitting a two run home run in Game 4 of the NLCS that eventually clinched the National League pennant. He appeared in the World Series for the only time in his career, but the Phillies fell to the Baltimore Orioles.

He platooned in right field for the Phillies in 1984, but left the team as a free agent after the season. He signed on with the Pittsburgh Pirates in 1985 and was used mainly as a pinch-hitter. It would be the 12th and final season of his major league career. After his playing days, he pursued a passion for coaching, making several stops in minor league stops across the country. In 2009, he was the batting coach for the rookie league Gulf Coast League Braves.

Why I love this card
Below you will find a shot of Lezcano's 1980 Super Card. I got both of these cards on the same day in 1980. I actually went without a Slurpee to instead buy a pack of cards and a pack of Supers. I knew immediately that the two pictures were taken on the same day, otherwise I never would have put the two together.

Something else....
Like all of us, Lezcano collected baseball cards. In 1980, he told the Milwaukee Sentinel:

I used to collect all those baseball cards.....Those cards were like my treasures. Nobody could touch them. I used to trade if I had more than one of a player. Sometimes I'd traded 25 different cards for one I needed. Now, I'm collecting mine. I put them in an album every year. Someday, I'll show them to my son and tell him, 'Here, this is what I looked like when I was playing baseball.'

While I never played in the major leagues, I sure can share the sentiment that Sixto is talking about here.

Lastly, Lezcano had a 1980 Topps Super Card which is pictured below: 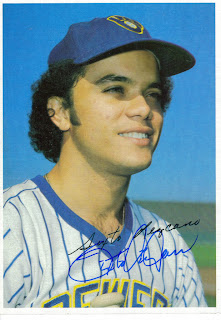