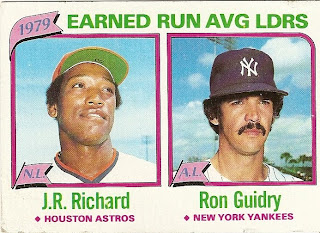 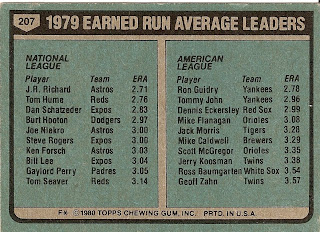 What is this card?
1979 Earned Run Average Leaders Card
Ron Guidry was the defending AL ERA Champion in 1979 and successfully defended his crown, even though his ERA was nearly a run higher than the previous year. J.R. Richard of the Astros led all of baseball with a 2.71 ERA. Richard is the only player to appear on two leader cards in 1980.

How was the race? Guidry's teammate, Tommy John was the American League leader for much of the first half, until two disasterous starts swelled his ERA and allowed Guidry to take the title. In the National League, Tom Hume was a late season challenger into the race, primarily since he was a releiver. Richard was able to nip him with 16 consecutive scoreless innings to close the 1979 season.

Where are the 1980 League Leaders? Neither Rudy May, the 1980 AL Champion nor Don Sutton, the NL Leader posted in the Top Ten in their respective leagues in 1979.

Did these players ever repeat? No. As mentioned in other posts, Richard's career was over by 1980 and the closest Guidry would ever come again was seventh in 1985.

Why I love this card
I was always intrigued by the contrast between the 5'11", 162lb Guidry and the 6'8" 225lb Richard, both of whom led their league in the same category. It truly amazed me how both could be such dominating starting pitchers. I was convinced that both would wind up in Cooperstown.

Something else....
For a New York Yankee, it seems that Ron Guidry's accomplishments have largely been overlooked. Even his 25-3 1978 season seems to be glossed over. While I'm not a Yankee fan and find that many of their players have been overrated, Guidry is one guy that I thought never received his fair share.
Posted by Dean Family at 4:28 PM