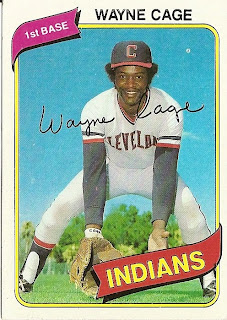 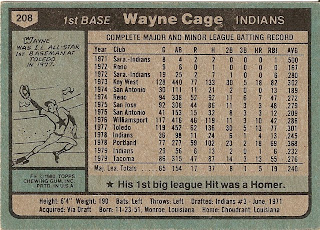 Who is this player?
Wayne Cage, reserve first baseman, Cleveland Indians
Playing the entire 1980 season at Triple-A, Wayne Cage played first base and outfield for the Tacoma Tigers. Cage failed to make the Cleveland Indians out of Spring Training, but responded by batting .308 with 19 home runs and drove home 89 for Tacoma. The lefthanded hitting Cage was not recalled to Cleveland for the Septemeber call-ups and after ten years in the Indians organization, his future in Cleveland was in doubt.

A native of Monroe, Louisiana, Wayne Cage was the third selection of the Cleveland Indians in the 1971 draft, originally as a pitcher. He attracted the attention of major league scouts by going 10-0 with a 0.86 ERA in high school. However, he tore his rotator cuff in his second professional season, ending his pitching career. Undeterred, a determined Cage worked his way back, this time as any everyday player.

He was a popular player at several different minor league locales, as he was a solid hitter, batting a combined .290 in ten minor league seasons. After years of perserverance, he finally made his major league debut on April 22, 1978. He appeared in 36 games as a first baseman and designated hitter, batting .245 with four homers and 13 RBI.

1979 would be his second and final major league year, appearing in only 29 games and batting only .232. After his return to Spokane, Cage was traded to the Seattle Mariners in 1981. He never appeared in a game with Seattle, as they promptly sold him to the Hankyu Braves of the Japanese Pacific League. He spent two years in Japan before ending his professional baseball career.

Why I love this card
This is a great pose on this card, but what I really love is how clearly you can see "CAGE" printed on the batting glove on Cage's right hand. Maybe it was subliminal but when I got my first pair of batting gloves, I wrote my name very similarly.

Something else....
Along with contemproraries Ralph Garr, Don Wilson and Lynn McGlothlen, four natives of Monroe, Louisiana played in the majors during the 1970s and three have cards in the 1980 set.
Posted by Dean Family at 11:31 PM