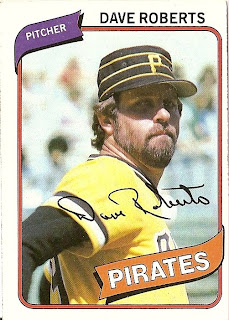 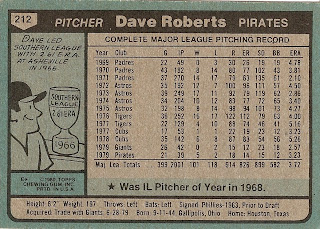 Who is this player?
Dave Roberts, relief pitcher, Pittsburgh Pirates
Shortly after the 1980 season began, the Pittsburgh Pirates sold lefthanded pitcher Dave Roberts to the Seattle Mariners. He pitched in only two games with Pittsburgh and appeared primarily in relief with the Mariners. Pitching for the worst team in the American League, Roberts appeared in 37 games winning two and saving three. However, he was not in the Mariners' long term plans as he was granted free agency at the season's end.

One of the more prolific Jewish pitchers in Major League history, Roberts ended his career second all-time in appearances (he is current third) among all pitchers of Jewish descent. He began his career in 1863 when he was signed by the Philadelphia Phillies as an amatuer free agent. Over a 13-year major league career, he would play for eight different major league teams; San Diego, Houston, Detroit, Chicago Cubs, San Francisco, Pittsburgh, Seattle and the New York Mets.

Roberts' career had several highlights. He was an original San Diego Padre and in 1971 finished second in the National League in ERA. It would be the only time that Roberts would receive Cy Young consideration (he finished sixth overall). Two years later, with the Houston Astros, Dave had likely his best season when he won a career high 17 games and finished with a 2.85 ERA. He was traded to Detroit where he won 16 games as second fiddle to Mark Fidrych. He had surgery on his knee and it would be the last time that he would be used exclusively as a starter.

In 1979, Roberts appeared in the postseason for the first and only time in his career. He began the campaign with the San Francisco Giants, but found himself traded to the Pirates in the Bill Madlock trade. The Pirates went on to win the World Series and Roberts appeared in the NLCS against the Cincinnati Reds. He pitched with the Mets in 1981, the final season of his major league career.

On January 9, 2009, Roberts died of lung cancer at his home in Short Gap, West Virgiia. He had developed asbestos lung cancer from a young age working as a boilermaker. He was only 64 years old.

Why I love this card
The things kids argue about. I can't remember who I argued with about this card, but I was convinced that Roberts was about to throw a pitch. My antagonist insisted that he was only stretching his arms behind his back. Really now, does it matter? But I did waste part of my young life debating this particular point.

Something else....
Only seven players featured so far have passed away, but three of them played on the 1979 Pittsburgh Pirates, Roberts, John Milner and Dock Ellis.
Posted by Dean Family at 11:58 PM