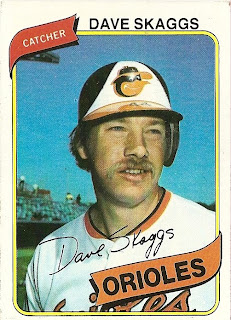 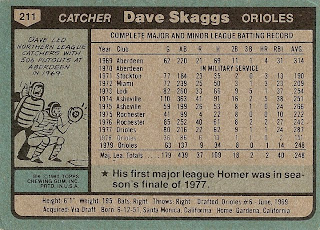 Who is this player?
Dave Skaggs, reserve catcher, Baltimore Orioles
As the backup to Rick Dempsey, Dave Skaggs began the 1980 season returning from back surgery in the off-season. After only two games, the Orioles sold Skaggs to the California Angels. In Anaheim, he resumed a backup role, starting 26 games to spell regular catcher Tom Donahue. He struggled at the plate, batting only .197. The highlight of his year was his first game as an Angel, when he had three hits, including a home run and five RBI.

Drafted out of North Torrance High School in Lawndale, California, Skaggs was a 6th round selection of the Orioles in the 1969 amateur draft. He would spend seven seasons working up the minor league ladder and was a member of a successful 1976 Rochester Red Wings squad. That team featured a core of players that would go on to become 1979 AL and 1983 World Champions. Skaggs was the starting catcher.

Skaggs made his major league debut in 1977 and had his most successful season. In 80 games, he batted .287 and was named to the Baseball Digest All-Rookie Team. However, Skaggs never enjoyed the same level of success at the plate during the remainder of the his major league career. In 1979, as the Orioles won the American League pennant, Skaggs batted .248 and appeared in both the ALCS and World Series. He was the starting catcher in the Orioles 9-6 Game Four win, going 1-3 and threw out Bill Madlock trying to steal.

Shortly before Spring Training began in 1981, the Angels released him but was quickly signed by the Seattle Mariners. After only a month, the Mariners likewise released him. He did not return to the major leagues and his four year major league career came to an end. He played in the Senior League during 1989-90 and has been an attendee at Orioles Old-Timers Games.

Why I love this card
The Oriole on Skaggs' helmet always transfixed me. For some reason, it just didn't look right. Is the Oriole too large? Is there more white paint on the right side than the left? It's funny what little boys (and now grown men) would spend hours discussing, debating and analyzing.

Something else....
Dave Skaggs hit three home runs in his major league career and two of them were against Rick Wise. Skaggs is also the last Oriole to wear #8 before Cal Ripken, although the #44 is clearly visible on his helmet. This card is also another Double Printed card.
Posted by Dean Family at 11:52 PM