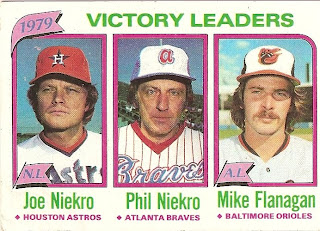 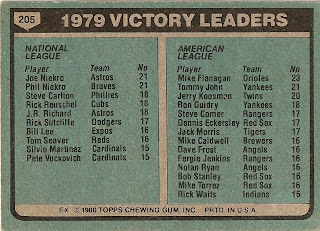 What is this card?
1979 Victory Leaders Card
Mike Flanagan of the defending American League champion Orioles led the baseball world with 23 victories in 1979 while the brothers Niekro both had 21 to lead the National League. Interestingly, 40-year old Phil managed 21 wins for a Braves team that only won 66 games that year.

How was the race? Obviously, the Niekro brothers led the NL during 1979. Joe rattled off nine straight wins during the first half of the season while Phil was more methodical. Flanagan, meanwhile, won 9 of 10 decisions near the end of the season to outpace Tommy John of the New York Yankees.

Where are the 1980 League Leaders? Steve Carlton of the Phillies was the 1980 National League victory leader, he was third here. Steve Stone of Orioles led all of baseball with 25 wins in 1980 did not place in the Top Ten on this card.

Did these players ever repeat? No. Joe would come the closest, finishing second in 1980 and three more times in his career. Phil would also finish in the Top Ten four more times, never higher than fifth. Flanagan would only once more place among the league leaders, 10th in 1980.

Why I love this card
Two knuckleballers leading the league in wins? How awesome is that?? Especially in this era with so many legendary fireballers: Richard, Ryan, Seaver, Guidry and the Niekro brothers top them all. In the previous post, I mentioned the diversity of skills in MLB at this time and this card is an example of that. Also cross off the Twins as now Jerry Koosman has placed 25 of the 26 teams somewhere in the Top 10 in five categories.

Something else....
Phil is the last player to have won and lost 20 in the same year, reflected on this card.
Posted by Dean Family at 9:49 PM