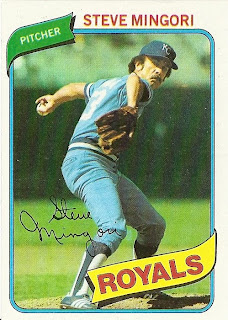 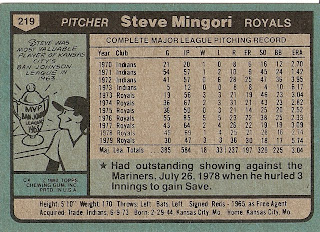 Who is this player?
Steve Mingori, relief pitcher, Kansas City Royals
Released by the Royals at the end of 1979 season, Steve Mingori's 10-year major league career was over by the time kids were pulling this card from packs. Based likely on a poor 1979 in which he posted a 5.79 ERA, the lefthanded sidearmer did not receive any offers from other major league clubs. While his name was mentioned in print regarding a spot with the Cubs or A's, things never materialized.

Born on Leap Year Day in Kansas City, Missouri, Mingori was a standout at Rockhurst High School and in the youth Ban Johnson League. He went on to atttend and star at Pittsburg State University. He wasn't drafted but was signed as a free agent by the Cincinnati Reds in 1965. The "book" on Mingori read that he had the stuff to be solid relief pitcher and he was groomed as such by the Reds. Cincinnati traded him to the Cleveland Indians shortly before the 1970 season was set to begin.

With Cleveland, he made his major league debut and settled in as a important member of the Tribe's bullpen. He led the team in ERA in 1971 and in saves in 1972. Despite that, he was traded to the Kansas City in June of 1973 and Mingori would be returning to his hometown as a member of the Royals.

Mingori was part of the Royals bullpen that won the AL West three years in a row (1976-1978). He appeared in the ALCS each year (all against the Yankees) but the Royals were unable to defeat New York and advance to the World Series. Mingori was normally used as a situational pitcher designed to get a tough out against a lefthanded batter in a crucial situation. He helped define this role years before it became an accepted part of baseball strategy. His best season likely came in 1976 when he finished in his leagues Top Ten in saves (10) and appearances (55) and posting a 2.32 ERA.

After his playing days, Mingori was a pitching coach in the Toronto Blue Jays organization in the early 1990s and was active in the Royals' Alumni. He was a fixture at several fund raising events and helped dedicate a field for disabled children in 2005. Unfortunatelt, Mingori died in 2008 at the age of 64 of natural causes.

Why I love this card
Mingori was born on Leap Year Day. This intrigued me as a kid. If it wasn't a Leap Year, when would he celebrate his birthday? February 28 or March 1? Did his age really count each year or every Leap Year? He would have been nine years old in 1980 using that logic, just like me, so it worked. Steve is also the third out of the last four cards to have their last name end in the letter "I." How's that for obscure?

Something else....
In 1962, the youth league that Mingori was part of, the Ban Johnson League, featured four future major leaguers: Mingori, Chuck Dobson, Paul Lindblad and the recently-famous Steve Renko. And to think that the guys I played Little League with never even played high school ball.
Posted by Dean Family at 5:16 PM