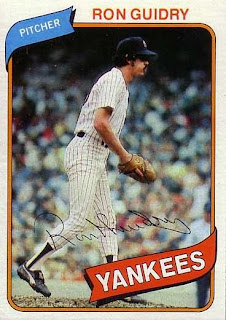 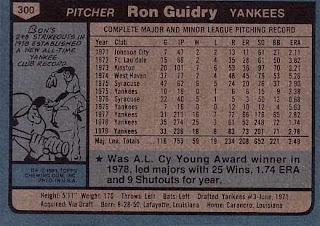 Who is this player?
Ron Guidry, starting pitcher, New York Yankees
Two years removed from the best season of his career, Ron Guidry began 1980 as the unquestioned ace of the Yankees staff. In "Bronx Zoo" fashion, he started the year by being fined by the club for participating in ABC's Superstars competition. On Opening Day, the southpaw allowed only two singles and retired 20 of the final 21 batters he faced, but earned a no-decision against the Texas Rangers. His performance was streaky for much of the year, but his 17 wins helped lead the Yanks to the AL West flag. Ron started and lost Game 1 of the ALCS, a series that saw New York lose to the Kansas City Royals. When the season ended, his name was involved in trade rumors to the Boston Red Sox for outfielder Fred Lynn. Instead, the Yankees renegotiated Guidry's contract and he stayed in New York.

1978, 25-3. Those numbers will forever be linked with Ronald Ames Guidry. His dominating performance that year not only led to a Cy Young Award and an another world championship, but was one of the finest pitching seasons of the modern era. Guidry's defining moment of the 1978 season was his 18-strikeout performance against the California Angels and his .893 winning percentage that year is the highest ever for a starting pitcher. Additionally, Guidry's 1.74 ERA remains the lowest in the American League since 1968. Throw in two post-season victories, including a World Series complete game, and you begin to see just how good Guidry was at his very best.

No one could have predicted such success when the man known as "Gator" was selected by the Yankees in 1971. The Louisiana-born Guidry pitched well in the minors, but found it difficult to crack the starting rotation. There was also a knock against him that he was too small to pitch effectively in the majors. However, he was moved into the starting rotation for good in 1977 and won 16 games en route to a world championship. His blazing fastball found him atop the game's strikeout leaders and he was soon alternately known as "Louisiana Lightning." His size would never again be an issue.

A four-time All-Star, Guidry quietly distinguished himself with class, hardly ever finding himself tabloid fodder like most of his teammates. He won the Gold Glove Award five consecutive seasons (1982-86) and three times won 20 games, leading the league again in 1985. Guidry began to experience some arm trouble in 1981 and despite his high levels of achievement, it effected his pitching. He struggled during the last three years of his 14-year career and retired in 1989 when shoulder surgery did not improve his arm.

His number 49 was retired on "Ron Guidry Day," August 23, 2003. The Yankees also dedicated a plaque to hang in Monument Park at Yankee Stadium. He joined Joe Torre's staff as pitching coach in 2006 and was criticized when the pitchers did not perform well in '07 and '08. Though he was interested in returning to the Yankees for the 2008 season, he was not offered a position on new manager Joe Girardi's coaching staff. He has returned to the Yankees as a spring training instructor and remains a popular figure at Yankee events and Old-Timers gatherings.

Why I love this card
When I got this card, I was convinced that Guidry was going to go to the Hall of Fame. This was one of those "hands off" cards that everybody respected. You didn't even bother to ask to trade for it because the unspoken law was that you didn't trade it. After all it was a "hundreds" card. Any card that ended with two zeros (300) was special. You either had it or you didn't. It would be a couple years later when we stopped caring about that and just traded liberally.

Something else....
Guidry was featured earlier on the ERA Leaders card, and he also had two other issues in 1980, first in the Burger King set and again in the Topps Super. Here are both. 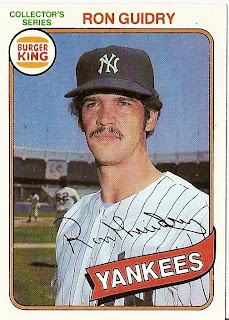 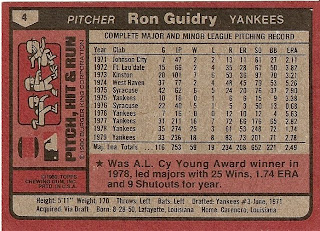 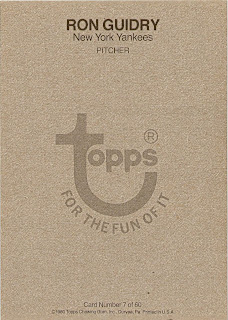