Today is my son's last day school. Hard for me to believe, but third grade is now in the books.

Every now and then I drive by my old elementary school (now closed) and am reminded of certain things when I was my children's age. In 1980 when I was collecting these cards, I was my son's age. Now, with my Dad getting older and his health not what it was, many days I feel like the linchpin between the generations. While I do my best to be a good father, I won't ever shake that little voice that tells me to also be a good son.

Baseball has been our common language. It is the first thing that Grandpa and grandson talk about when they see each other. When he was feeling better, the first person to pitch to my son was my Dad.

Now, with my son's final grades in, my Dad and I watched my son play in his little league game tonight (they won). I lost count of how many times we did that over the year, either at a ballpark somewhere or on TV. Sometimes it may even be sitting in the driveway in the old Buick trying to get KDKA to hear Bob Prince or KMOX for Jack Buck.

Inevitably, our conversation turned to when I was nine.

"Do you still have all of those books from when you were his age?"

Indeed, I do Dad.

He was talking about books that I got through the Troll Book Club. For those of you that are unfamiliar, these were a highlight during the school year. Kids would order and just when you forgot about them, they would come in.

Every year, Scholastic Books would print another edition of the "All Pro Baseball Stars" by Bruce Weber. Even though these were already in the school library, it was still special to own your own copy. The first one I ever got was the 1980 edition and we got it on my last day of third grade in 1980. Why we got it in June is questionable, but I didn't care, I was just happy to have it.

Here are the front and back covers: 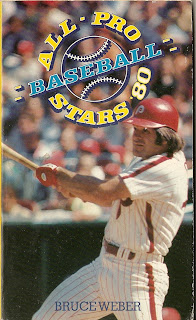 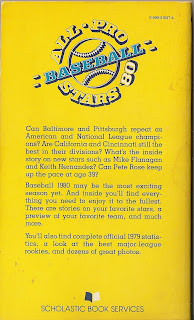 For a time, I took this book everywhere. In the car. In the backyard. To restaurants when we went out to eat. I devoured everything within its 92 pages. Then I devoured it again.

The book contained their All-Star selections for the AL and NL from the previous seasons (the All-Pro title always bothered me, that was football). Here's a scan: 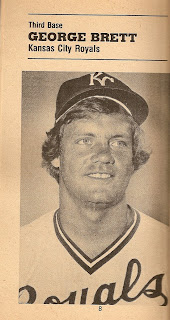 There was also another section on the top rookies and complete team previews for every major league team: 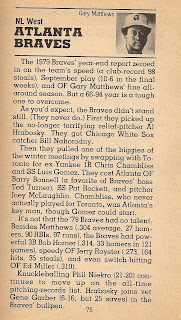 Finally, there were complete listings of all position players and pitchers. I loved how they refered to players by their complete name, like Lawrence Bowa and Louis Brock. 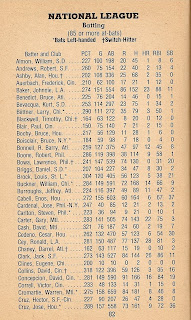 In time, I would obtain every one of these between 1976 and 1988. I think that was the run of these, but I am not certain. But it's also not the point.

It's about the start of summer. It's about baseball. It's about fathers and sons. And it's about how great things are when all three of them come together.
Posted by Dean Family at 9:45 PM