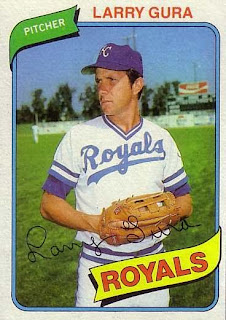 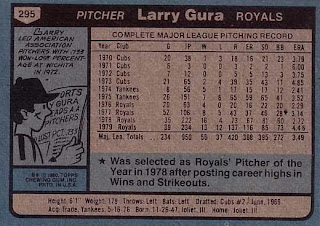 Who is this player?
Larry Gura, starting pitcher, Kansas City Royals
When I first pulled this card from the top of a grocery pack in the summer of 1980, Larry Gura of the Kansas City Royals was in the midst of his finest season. Armed with an array of off speed pitches, the lefthanded Gura helped lead the Royals to the American League pennant and was named an All-Star. A winner of 18 games, Gura finished fifth in his league with a 2.95 ERA and fourth with 16 complete games. He won the opening game of the ALCS against the Yankees and pitched well in the World Series against the Phillies (2.19 ERA) but did not earn a decision in either of his starts.

Originally from Joliet, Illinois, Larry Gura pitched for Arizona State University and pitched two no-hitters in the National Baseball Congress Tournament in 1968. The NBC is organization of 15 amateur and semi-professional baseball leagues. This performance earned Gura a spot on the 1968 Olympic baseball team. While never blessed with an overpowering fastball, Gura learned the fine art of pitching with pinpoint control and stamina.

Originally taken by the Chicago Cubs in the second round of the 1969 draft, Gura arrived in the Windy City one year later. Pitching sporadically over his first four seasons, Gura failed to impress and never gained the support of manager Leo Durocher. The Cubs traded Gura to the Texas Rangers where he played just one year and was traded again, this time to the New York Yankees. Gura performed well when called up from the minors in 1974 and earned a spot in the New York rotation as the fifth starter. Gura's status changed, however, when Billy Martin was named manager and he went with a four-man rotation. Gura was traded to the Kansas City Royals shortly thereafter.

It was as a Royal that Gura earned his greatest fame. He appeared in the postseason five times in ten seasons in Kansas City, establishing himself as one of the finest pitchers in team history. In the early part of the 1980s, Gura was regarded as one of the premier starting pitchers in the American League, three times posting among the league leaders in victories, ERA, starts and innings pitched. He was the Royals Opening Day starting pitcher twice and is still among the franchise leaders in several pitching categories.

After leading the league in losses in 1983, Gura never regained the effectiveness that he previously enjoyed. After struggling again in 1984, the Royals released Gura early in the 1985 season. His career came full circle as he was signed by the Cubs, where he appeared in five games before ending his 16-year career. Gura was inducted by the Kansas City Royals Hall of Fame in 1992 and like most fan favorites, even had a bobblehead night in his honor in 2008. Today, Gura is enjoying his retirement on his ranch near the Royals' Spring Training home in Surprise, AZ.

Why I love this card
I was always so jealous of the Royals pitching during this era. It seemed that they were so rich in pitching while nearly every other team was woefully short. Even more maddening is that they weren't particularly overpowering. Guys like Gura, Paul Splitorff, Dennis Leonard, they just won division championships. Even today when I see a "crafty lefthander" my mind eventually comes to a guy like Larry Gura.

Something else....
One of the more interesting (and largely forgotten) sidebars of the 1976-1977 Yankee-Royals matchup was the animosity that existed between Gura and Billy Martin. Gura never forgave Martin for trading him and Martin didn't consider Gura an exceptional pitcher. It irked Martin that Gura was ahead of his time in regards to nutrition, conditioning and weight training, Gura's passions. And if the legendary brawler Martin would have decided to mix it up with Gura, Larry owns a green belt in tae kwon do.

On this date in 1980:
Hockey superstar Gordie Howe of the Hartford Whalers announces his retirement at age 51. "Mr. Hockey" retires owning nearly every individual hockey record imaginable.
Posted by Dean Family at 11:36 PM