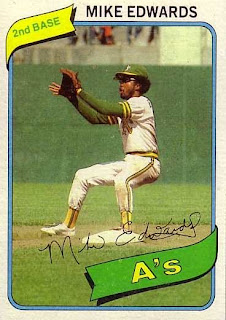 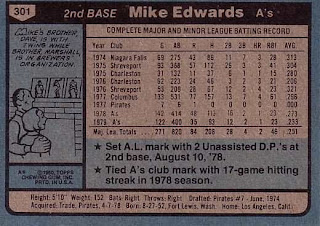 Who is this player?
Mike Edwards, second baseman, Oakland A's
The year began curiously for the A's Mike Edwards; he went to salary arbitration with the notorious owner Charlie Finley. Edwards likely became the only player in history to ask for less than what any owner offered, $50,000 to Finley's offer of $58,000. Of course, Edwards was not aware of the offer, and signed on to what would be his fourth and final major league season. New skipper Billy Martin used Edwards sparingly and he batted .237. He was not offered a contract at the end of the season and he did not catch on with another major league club.

Mike Edwards was from a baseball family. Two of his brothers made the major leagues as well. Younger brother Dave has a card featured in this set and played the most seasons in the majors (1978-1982). Mike's twin, Marshall, saw postseason action with the 1982 AL Champion Milwaukee Brewers. Mike and Marshall are part of baseball history; only nine sets of twins have both advanced to the major leagues.

The Los Angeles, California native was the first in his family to reach the bigs after a successful minor league career. Drafted by the Pittsburgh Pirates in 1974, he led the New York-Penn League in games played, at-bats and triples while playing for Niagara Falls and later led the International League (AAA) in hits and stolen bases. Edwards also showed his talents in the field, leading the IL in double plays and total chances. He appeared in a handful of games for the Pirates in 1977, but his big break came when he was traded to the Oakland A's in April, 1978.

He made an immediate impact, setting a club record with a 17-game hitting streak and scoring five runs in a game. The defining moment of his career came on August 10, 1978 when he tied the major league record for unassisted double plays by a second baseman. Mike pulled the trick twice against the California Angels. On the other side, he also established a major league record for most time caught stealing by a rookie (21).

His production fell off precipitously in 1979 as his average fell by 40 points and he stole 17 fewer bases. However, that is tempered by the fact that the A's of 1979 were one of the worst teams of the modern era and in a constant state of flux. When he lost his job in 1980, he rebounded and played in Japan in the early 1980s. Any information on his current whereabouts would be most appreciated.

Why I love this card
What a great action shot! I can hear my Little League coach now, "Two hands! Two hands!" By far, the A's lead this set with the best live game photography. Interestingly, the standouts have been of their middle infielders, first Mario Guerrero, then Rob Picciolo, now Edwards. Even if you didn't know who Edwards was or even care about the A's, if this card showed up in your pack, you were guaranteed to spend some of your summer afternoon gazing it over.

Something else....
Here is Edwards' 1979 Record Breaker card: 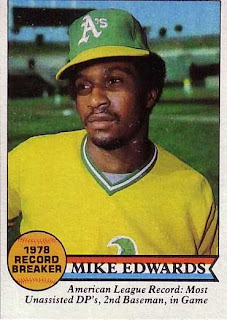 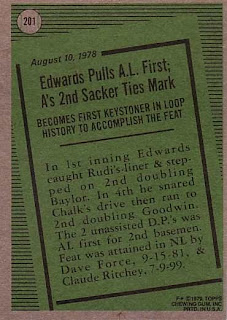 I ended up getting this card probably in the mid-1980s sometime and wondered what happened to Mike. After all, he set a record, didn't he? My mind couldn't comprehend the 'here today, gone tomorrow' turnover in major league baseball. I'm still wondering what happened to Mike Edwards.

On this date in 1980:
The Blues Brothers debuts on this date in Chicago. I was not fortunate to see this in theatres the first time through, but have seen it a hundred times since. I don't get tired of it (I know, I'm sick) and am glad that this movie introduced me to artists like Ray Charles, John Lee Hooker and Cab Calloway. Shame, a boy that young goin' bad..... 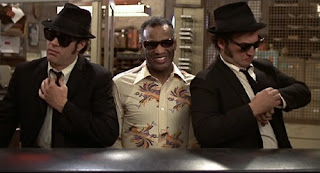