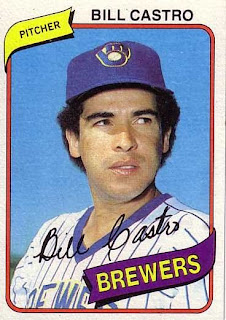 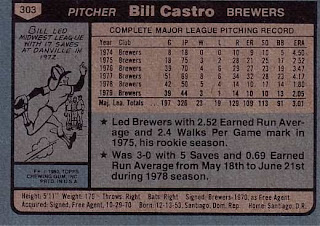 Who is this player?
Bill Castro, relief pitcher, Milwaukee Brewers
In what was generally regarded as a disappointing season for the Milwaukee Brewers, righthanded pitcher Bill Castro had perhaps his finest season. Working in a career-high 56 games, Castro provided a solid and reliable arm while much of the Brewer pitching staff was injured or inconsistent. After two months, he allowed only two earned runs and found himself with a 0.67 as June began. He would go on to lead the Brewers in ERA (2.77) and games finished (36). Castro was particularly impressive against division leaders, posting a 2.16 ERA with 2 saves against the eventual champions, the Kansas City Royals and New York Yankees.

No man has spent more time in a Milwaukee Brewer uniform than Bill Castro. After spending seven of his ten big league seasons as a pitcher for the Brewers, he became the team's bullpen coach in 1992 and stayed with the club in a coaching capacity until 2009. After 25 years in Brewer colors, Castro was fired in August of 2009, mainly due to the Brewers letdown after a playoff appearance in 2008. Castro was in his first season as pitching coach under new manager Ken Macha and his dismissal was seen by some as making Castro a scapegoat for Milwaukee's disappointing season.

Born in the Dominican Republic, Castro has since told researchers that he is actually a year and a half older than his listed birthday of December 13, 1953. He was signed by the Brewers as a free agent in 1970 and proceed to excel in their minor league system. He led the Midwest League with 17 saves at Danville in 1972. Bill followed that with a Midwest League led in won-lost percentage (.733) and a 1.82 ERA. These showings earned him a late season look by the Brewers in 1974.

Castro quickly became one of the Brewers top pitchers. He led the staff in ERA during the 1975 campaign and had eight saves for the team in 1976. During this time, he was the Brewers' go-to pitcher in several critical situations. However, when the Brewers acquired relief ace Rollie Fingers in December 1980, Castro's time in Milwaukee was over. He left the team as a free agent and signed on to pitch with the New York Yankees. He was demoted to the minor leagues shortly before the 1981 strike and didn't appear in another major league game that season.

Bill moved on to Kansas City in 1982 where he spent parts of two seasons before being released. He returned to the Brewers and spent the remainder of the 1983 season at Triple-A before finishing his pitching career. After his playing days, he served as a scout with the Brewers (1985-87) and minor league pitching coordinator (1989-91).

Why I love this card
I know that I have mentioned that I am not a fan of the headshots in this set, but for some reason, Castro's reminds me of the Olan Mills photographs you would get for your grade school pictures. I know that is supposed to be the blue sky behind Castro, but I think that was also the background for my entire class Grades 4 through 6.

Something else....
When Castro signed with the New York Yankees, most in the media considered the move a sign that New York was looking to deal Ron Davis. Indeed, Davis himself felt the move was imminent. Oakland manager Billy Martin openly campaigned to get Davis, but ultimately the deal wasn't made and Davis continued to set up closer Rich Gossage. The arrangement was successful as the Yankees advanced to the World Series.

On this date in 1980:
After weeks of mounting tension, race riots boil over in Cape Town, South Africa. In one of the most ugly scenes, 34 people die in clash between police and demonstrators.
Posted by Dean Family at 9:07 AM