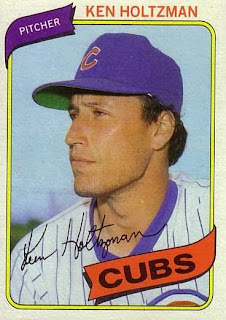 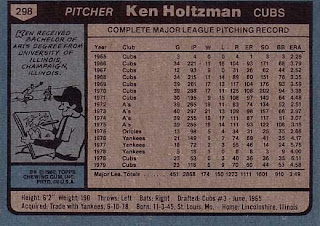 Who is this player?
Ken Holtzman, pitcher, Chicago Cubs
By the time kids across America were pulling this card from their packs in 1980, Ken Holtzman had already moved away from the diamond and transitioned into the brokerage business. After 15 years in the major leagues, Holtzman retired as a 3-time World Champion with the Oakland A's, pitched two no-hitters and was one of the more underrated pitchers of his era.

Holtzman was selected by the Chicago Cubs in the 1965 amateur draft, the inaugural First-Year Player draft. He was the first drafted player to make it to the majors when he made his big league debut that September. The following season, the fireballing southpaw led the Chicago staff in wins and strikeouts. Dubbed "The New Koufax" the Jewish Holtzman faced the Dodger legend in late-September. He defeated the future Hall of Famer late in the 1966 season, holding the Dodgers hitless for eight innings the day after Yom Kippur. He played only part-time in 1967, due mainly to military obligations, but posted a perfect 9-0 record pitching on primarily on weekends.

Holtzman became a strong second starter behind Cubs' ace Ferguson Jenkins. After going 11-14 in 1968, he posted consecutive 17-win seasons. In military service again in 1969, he was able to return to the team and pitch in weekend games. On of those was his first career no-hitter against the Atlanta Braves. Despite this promise, and a second no-hitter against the "Big Red Machine" era Cincinnati Reds, Holtzman was traded to the Oakland A's, namely because Cub manager Leo Durocher didn't care for Holtzman. It would prove to be a ill-fated move for Chicago.

In Oakland, Holtzman was the #2 starter on an Oakland team that dominated baseball. He averaged 19 wins a season in his four years with the A's, with a high of 21 in 1973. He won four games during three World Series with the A's, including Game 7 in 1973 against the New York Mets. However, Holtzman would be known more for his bat during World Series play. Never known as a great hitter in his NL days, Holtzman batted .308 during the World Series, including key hits during the 1973 Series. In 1974 he homered, the last pitcher to do so in World Series play until 2008.

When Charlie Finley dismantled the A's, Holtzman was one of the first to go, traded to Baltimore in 1976. Shortly thereafter, he was sent to the New York Yankees. In New York, he saw his playing time limited, and did not appear in the 1976 or 1977 postseasons with New York due to owner George Steinbrenner being disappointed by his performance and refusal to meet his demands. Holtzman needed consistent work to be sharp and he didn't get it in New York. When he did make an appearance, it was typically in mop-up or long relief roles. He went to the Chicago Cubs and spent the final two years of his career where it began before beginning a successful and lucrative career away from the game.

Why I love this card
I was always a sucker for the cards of longtime veterans. The back of Holtzman's card facinated me to see how long his career was. To see a guy begin his career in the 1960's? That was impressive to me. I may not have known who Holtzman was at the time, but I knew that he must have been good to have been around so long. My Dad filled in the rest.

Something else....
Holtzman is the all-time winningest Jewish pitcher with 174 career victories. He was inducted into the Chicagoland Sports Hall of Fame and in 2007 he managed the Petach Tikva Pioneers in the inaugural season of the Israel Baseball League.

On this date in 1980:
In Los Angeles, comedian Richard Pryor is badly burned trying to freebase cocaine. He later made this part of his comedy act as part of 1982's concert, Richard Pryor: Live on the Sunset Strip. A clip can be seen here. LANGUAGE WARNING.
Posted by Dean Family at 10:41 PM