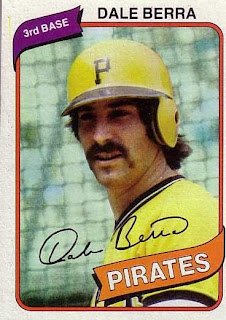 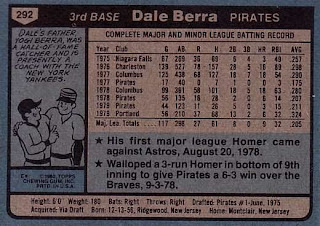 Who is this player?
Dale Berra, reserve infielder, Pittsburgh Pirates
The son of a famous father, during the summer of 1980 Dale Berra was looking to establish himself as a major league player. He received an opportunity to play everyday when regular shortstop Tim Foli was hurt in June. In his first start, he had two hits and two RBI, and he followed that performance with a 3-hit, 5-RBI showing against the Mets. His batting average steadily dropped, however, and when Foli returned, so did Berra's spot on the Pirate bench. Berra also saw action at second and third and was considered one of Pittsburgh's top young players.

What must it be like to be the son of a Hall of Famer? Especially if you chose to follow in his footsteps? On one hand, you have the best advice, guidance and support possible. On the other, you have a pretty big legacy to live up to. Such was the case when Dale Berra began his professional career out of high school in 1975. Within two years, he made his major league debut and initially stardom was considered inevitable.

Things would not be that simple. It would take Berra almost five seasons to become an everyday player as he spent his early years with the Pirates shuttling back and forth to Triple-A. When he finally cleared that hurdle, he cut his teeth as a role player. Given his first opportunity as a regular in 1982, the righthanded hitting Berra had the most satisfying season of his career. He batted .263, clubbed 10 homers and drove in 61 runs, better than average for a National League shortstop at that time. More importantly, it proved once and for all that Berra was indeed a major league-caliber player.

Berra was with the Pirates for eight seasons and then traded to the New York Yankees were he was reunited with his father, now the manager. Yogi lasted only 16 games and Dale saw his playing time reduced under new manager Billy Martin. His improvement regressed since 1982 and the reason soon became clear; Berra was involved with drugs. Like many of his generation, cocaine was the drug of choice and Dale was soon in the spotlight during the Pittsburgh Drug Trials of 1985. In his testimony, Dale also implicated former teammates Bill Madlock and Willie Stargell. Within two years, Dale was out of baseball, playing a handful of games for the Houston Astros in 1986-87 before retiring after and 11-year career.

It would take some time before Berra fought back the demons of substance abuse. His arrest in 1989 was a wake up call and he got his life back in order. Today, he and his brothers are actively involved in the Yogi Berra Museum in Montclair, New Jersey. Among other things, Dale is responsible for the educational programs provided by the museum and maintaining his father's image and likeness. Those Aflac commercials? That's Dale, keeping his father in the public eye.

Why I love this card
When you are nine years old and you get a card with "Berra" on it, you know that its a keeper. Especially if your neighbor had just moved on the block from New York and is a Yankee fan. The first time I got this card, I traded it for a Stargell and Fidrych. The second time I got it, I traded it for a Pete Rose. Yes, he wanted a second one that bad. It took me a couple of years to get this card again to complete my set, but it was worth it.

Something else....
Dale's older brother Tim was an All-American football player at the University of Massachusetts and played one season in the NFL. In 1974, Tim Berra returned 84 kicks and punts with the Baltimore Colts.

On this date in 1980:
Cable News Network (CNN) makes its debut on this day. Here is their first few moments of broadcasting.
Posted by Dean Family at 5:44 PM