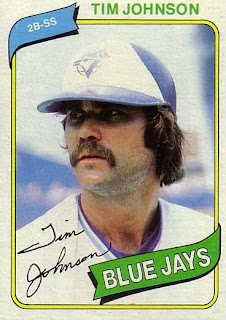 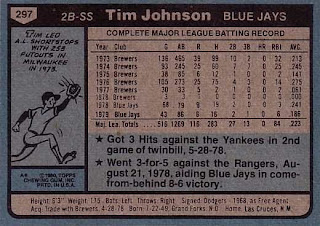 Who is this player?
Tim Johnson, infielder, Toronto Blue Jays
After putting the finishing touches on a seven-year career as a major league infielder, Tim Johnson was spending his first season with the Major Leagues Central Scouting Bureau in 1980. It was the start of a second career in baseball for Johnson that would culminate of him being named manager of the Toronto Blue Jays in December 1997.

As a youth, Tim Johnson led his Connie Mack team to the state finals in North Dakota two consecutive seasons (1966 & 1967). This caught the eye of the Los Angeles Dodgers, who signed Johnson as an amatuer free agent in 1968. Tim made a splash immediately, becoming only the ninth player in the history of the California League to get six hits in a game and he led all shortstops in assists, chances and double plays. Johnson earned a repution as a solid defensive player, winning a Silver Glove as the best fielding minor-league shortstop in 1970. However, he had trouble with the bat, batting .243 in parts of six minor league seasons. Since the Dodgers were so deep in minor league talent in the early 1970s, Johnson was traded to the Milwaukee Brewers in 1973.

The Brewers of the early 1970s were a different story than the Dodgers. Only a few seasons removed from their expansion season as the Seattle Pilots, the Brewers had many holes at the major league level. Johnson filled one at shortstop and although he hit only .213, he appeared in 136 games and was named to Baseball Digest's All Rookie Team for 1973. However, the next season he lost the position to future Hall of Famer Robin Yount and spent the remainder of his Milwaukee career in a utility role.

Johnson played every infield position during his Brewer days, but his performance was one of contrasts. He hit .275 in 1976 but followed that with a .061 mark in 1977. With his major league career on the proverbial bubble, he was able to play two more season with the Toronto Blue Jays in a similar role. When the 1979 season concluded, so did Johnson's career. From there Johnson scouted and coached for several teams throughout the 1980s and 1990s before earning his first shot as a major league manager.

When Johnson took over the Blue Jays in 1998, they were a team in decline. He earned the job over more notable candidates due to his reputation for motivation, communication and enthusiasm. Although the Jays would win 88 games and make a Wild Card run, Johnson had clashes with coaches and players. The discontent boiled over when it was revealed that Johnson embellished his military service and athletic background. He was fired by the Blue Jays during Spring Training 1999. Since then, Johnson has managed in independent leagues and in Mexico but has never made a return to the major leagues.

Why I love this card
When I look at this card now, I honesty cannot recall any specific memories of what drew me to this card. When I see this card, all I think of the public disgrace that Johnson endured (granted by his own doing) as manager of the Blue Jays. What gets forgotten is that Johnson led the Jays to their most victories since their World Series championship season of 1993.

Something else....
Today, Johnson is managing the independent Tuscon Toros. His son has created a production group develop both a documentary and a feature-length film about his dad. I will say this, the entire Tim Johnson saga would make for an interesting made-for-TV movie.

On this date in 1980:
It was the 36th anniversary of D-Day, arguably the most significant date of the last 100 years. Like Topps has done with #7 in their base sets, I am "retiring" this date to stop and honor those who have served and died in the call of duty. I humbly thank you.
Posted by Dean Family at 1:04 PM