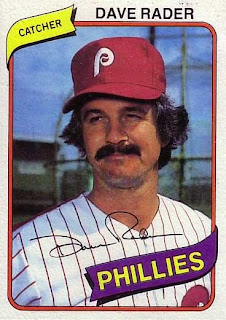 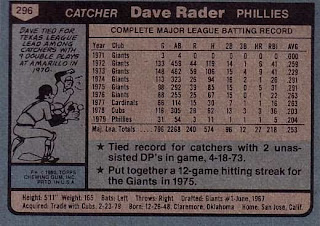 Who is this player?
Dave Rader, reserve catcher, Philadelphia Phillies
Shortly before the 1980 season got underway, the Phillies traded Dave Rader to the Boston Red Sox. The Red Sox were in a pinch due to an elbow injury to incumbent Carlton Fisk and were looking to add depth. The veteran Rader earned the starting nod on Opening Day. He had a 4-hit performance against Kansas City in early May and his batting average didn't dip below .300 for the remainder of the season. In spot-starting duty, Rader finished 1980 batting .328 with 3 HR and 17 RBI.

An excellent high school athlete, Rader starred on the gridiron as an linebacker and fullback, but it was on the diamond where he truly shined. Switched to catcher in his junior year after receiving accolades at third base, Rader was twice an All-League performer. This earned him attention from major league scouts and the San Francisco Giants made him their first selection in the 1967 draft. Rader was an excellent defensive receiver and when he batted .314 at Triple-A Phoenix in 1971, he earned a chance with the major league club.

Manager Charlie Fox and the Giants were in the midst of a youth movement in San Francisco and the 23-year old Rader won the job from longtime veteran Dick Dietz. His performance in 1972 earned him The Sporting News' Rookie of the Year Award for 1972. Playing in 133 games, Rader batted .259 and also achieved career highs in hits and RBI. He followed that with another solid season in 1973, while cementing his reputation as a fine fielder when he recorded an unassisted double play, rare for a catcher. Not that it means anything, but the game was also played on Friday the 13th.

Even though he batted a career high .291 in 1974 and again in 1975, new manager Wes Westrum platooned the lefthanded hitting Rader with Marc Hill. Even though Rader saw the majority of the action, he would never appear in more than 100 games in a season again. After six years in San Francisco, he was traded; as part of a multi-player deal to the St. Louis Cardinals.

From there, Rader would spend the final four seasons of his ten-year career with four different teams. At each stop, Rader served as the backup catcher, with St. Louis, the Chicago Cubs, Philadelphia Philles and finally Boston Red Sox. The Red Sox did not offer him a contract for 1981 and he signed on with the California Angels. He made the Angels roster out of Spring Training that year, but never appeared in a game for California and was released in late-April. He never again played in a major league game.

Why I love this card
One of the things I used to do was line up my cards while I watched a particular game on TV. I was doing this during the World Series that fall and had out all my Phillies and Royals. By October, I had a majority of the cards and certainly all the key players. I distinctly recall the pregame introductions with everybody being introduced from both teams. I was disappointed that there was no Rader. My Dad didn't know what happened to him either. Somehow, his entire 1980 season in Boston managed to escape both of our attention.

Something else....
Rader has one of the more interesting rookie cards in history. Here it is: 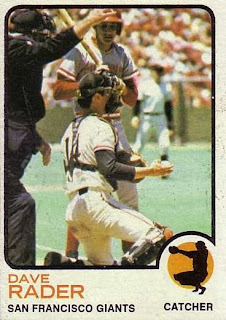 I didn't get this card until several years later as 1973s were as far away as the moon to a nine-year old in 1980. If Rader's name didn't appear on this card, I would swear that it was a Dave Concepcion card.

On this date in 1980:
George Bush throws in the towel and ends his two-year run for the presidency and instead, throws his support to Ronald Reagan, the man who defeated him. Said Bush:

My overwhelming instinct was to stay and fight, but you’ve got to be realistic. There is a widespread perception that the campaign is over. As a result, it has become increasingly difficult to raise the funds needed.