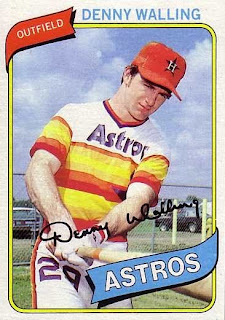 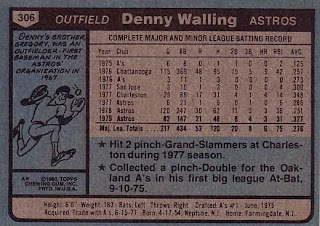 Who is this player?
Denny Walling, utility, Houston Astros
A valuable role player, Denny Walling was a key player off the bench as the Houston Astros won their first ever National League West title in 1980. Playing mostly first base and outfield, the left-handed Walling batted .299 in 100 games playing primarily against the right-handed pitchers. His 11th-inning sacrifice fly in Game 3 of the NLCS gave the Astros a 1-0 win and a brief 2-1 series lead. Walling scored a game-tying run in Game 5 and later gave the Astros the lead with a 7th inning single, but the Astros fell to Philadelphia in 10 innings 8-7.

Denny Walling was a collegiate star at Clemson University, where he was a two-time All American. The Oakland A's selected him with the first overall selection in the 1975 June secondary amateur draft. Before the season ended, Walling had made his major league debut, batting .125 in limited action with Oakland. He spent most of 1976 in the minor leagues and was traded to the Houston Astros in June 1977 in a deal for Willie Crawford that most did not notice at the time.

It turned out to be the turning point in Walling's career. Denny would spend 13 years in Houston and was a member of both the 1980 and 1986 NL West Champions. Primarily an outfielder on his arrival, Walling would soon find plenty of playing time at first and third base over the years, and although he often platooned, he still managed to appear in over 1000 games with the Astros. A tenacious hitter with an excellent eye for the strike zone, his best season came in 1986 when he batted .312 and reached career highs in several offensive categories. He had the game-winning hit in Mike Scott's division clinching no-hitter in September, but batted .158 in the NLCS as Houston lost a memorable series to the New York Mets in six games.

Traded in 1988 to the St. Louis Cardinals for pitcher Bob Forsch, Walling was used primarily as a pinch-hitter. In 1989, his .344 average in a pinch-hitting role was among the league leaders. He played one more season in St. Louis before moving on to Texas and then back to the Astros for a brief stint in 1992 to finish his 18-year career.

After his playing career ended, Walling remained in baseball as a coach. In the major leagues, he has served as the hitting coach for the Oakland A's (1996-1998) and for the New York Mets (2002-2004). Both times, he served under manager Art Howe, who was his teammate with the Astros. In 2007, he was hired by the Baltimore Orioles as their roving minor league instructor, a position which he currently holds.

Why I love this card
I rooted hard for the Astros in the 1980 playoffs. When Walling had two hits with two runs and an RBI in Game 5, he became a favorite. It probably didn't hurt that Walling's photo here looked a lot like my little league picture, complete with a shot of the parking lot in the background. I know it is a Spring Training shot, but he looks like they stopped him on his way to his car.

Something else....
Walling is listed as being from Neptune. Granted, it is Neptune, New Jersey, but to a eight-year old getting this card and reading that....I guarantee that it was discussed for hours.

On this date in 1980:
Walling goes 2 for 4 as the Astros defeat the Pittsburgh Pirates 4-2 at the Astrodome. The victory gives Houston a three game lead in the NL West as summer begins. Other division leaders are Montreal, New York and Kansas City.
Posted by Dean Family at 11:34 PM