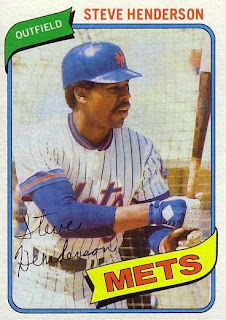 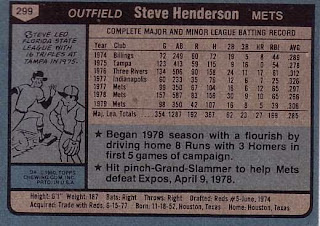 Who is this player?
Steve Henderson, left fielder, New York Mets
The year 1980 began painfully for the Mets' Steve Henderson, as he injured his shoulder in January playing winter ball in Puerto Rico. He healed up in time for Spring Training and was ready to go by Opening Day. Henderson got off to a great start, putting together 14 multi-hit games by Memorial Day. By early June, he had a 13-game hitting streak and was leading the National League in batting. He tailed off as the season wore on, but he still hit a strong .290, leading the team and show the promise predicted for him when he was traded for Tom Seaver in 1977.

The pride of Prairie View A&M, the righthanded hitting Henderson was selected by the Cincinnati Reds in 1974. Henderson rapidly became one of the prize prospects in the Reds system after leading the 1975 Eastern League with 158 hits, 11 triples and 255 total bases. The following year, he batted .312 at Double-A and improved upon that when he was batting .326 for the Triple-A Indianapolis Indians in 1977. It was in June that he was part of a multi-player package in the Seaver deal, and Henderson was considered the prize of the group.

Thrust into the Mets' lineup, Henderson paid immediate dividends. He hit a dramatic game-winning home run in the 11th inning to defeat the Atlanta Braves in just his fourth major league game. For the season, Henderson had a .297 batting average in 99 games with twelve home runs and 65 RBI. He narrowly finished second to Andre Dawson of the Montreal Expos in NL Rookie of the Year balloting and was considered a coming star.

Nicknamed "Stevie Wonder," Henderson began the 1978 season quickly, homering three times in the first five games. Typically batting third, he played in a career-high 157 games and Steve batted .306 in 1979. His season was cut short by an ankle injury that saw him miss nearly two months of action. When the Mets changed owners in 1980, they began to make moves to appease their fan base. On February 28, 1981, the Mets sent Henderson and cash to the Chicago Cubs in order to re-acquire fan favorite Dave Kingman. Steve spent two seasons with the Cubs and it began to become clear that while Henderson was a good hitter with an excellent eye, his lack of power ultimately cost him playing time.

Henderson was traded to Seattle for the 1983 season and it was the last time he played as a regular. He bounced from Seattle to Oakland and to Houston as a part-time player before ending his 12-year career in 1988. He became a player-coach with the Pittsburgh Pirates' affiliate Buffalo Bisons in 1990 and remained a coach in the system for three more years before becoming a Houston Astros coach for three seasons (1994-1996). Henderson joined the expansion Tampa Bay Devil Rays organization and spent 8 years as the minor league hitting coordinator (1997 and 1999-2005). He was the Rays hitting coach in 1998 and returned to that position in 2006.

Why I love this card
This is just a great card. Maybe it's the pose. Maybe it's the bold royal blue throughout. Or maybe it's that when this set first came out, Steve was the most famous Henderson in the 1980 set. Of course, by the fall, Rickey had something to say about that, but for a moment at least, Steve's promise is captured in this card in the bright afternoon sunlight.

Something else....
Steve was the scapegoat in the Rays' disappointing 2009 season when Tampa failed to return to the postseason and defend their AL Championship. He was fired after the season ended, following a season in which the Rays set team records for runs, home runs, on-base percentage and walks. Many of the current Rays stars, such as Evan Longoria and B.J. Upton have credited Henderson's tutelage as instrumental to their success.

On this date in 1980:
Henderson goes 0-4 with a run scored as the Mets defeated the Los Angeles Dodgers 6-2 at Shea. The Mets were in the midst of playing improved ball excited their fans and moved them into fourth place in the NL East. It would be short-lived, however, as the Mets lost 95 games and finished 24 games behind the World Champion Phillies.
Posted by Dean Family at 12:17 PM