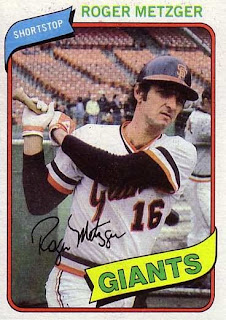 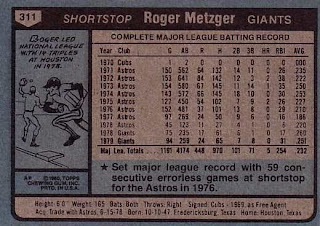 Who is this player?
Roger Metzger, utility infielder, San Francisco Giants
In November 1979, Roger Metzger of the San Francisco Giants was badly hurt when he severed parts of four fingers on his right hand in a sawing accident at his home in Texas. Determined, Metzger reported for Spring Training to reclaim his position on the Giants. He not only won a roster spot by batting .300 during the exhibition season, but the respect and admiration of peers and teammates. Used primarily as a defensive substitute and pinch-runner, Metzger struggled at the plate, batting only .074 (2 for 27). He retired in August, ending his 11-year career, and spent the remainder of the season as a coach on the Giants' staff.

Texas-born Roger Metzger was a collegiate star at St. Edward's University in Austin. The switch-hitting shortstop was an All-Conference player and was selected as an alternate to the 1968 Olympic baseball team. In 1969, he batted .414 was was named to the All-American baseball team. This made him the #1 selection of the Chicago Cubs in June, 1969. He was in the major leagues the following season, but only appeared in one game. That winter, he was traded to his hometown Houston Astros, for whom he would play the majority of his career.

As a shortstop, his reputation with the Astros quickly rose; he led the National League in triples in 1971 & 1973, setting a team record in the process. He also developed a reputation as one of the premier defensive shortstops in the league, leading NL shortstops in putouts in 1971 and double plays in 1972. He was rewarded for his fielding excellence in 1973, when he earned the National League Gold Glove Award. He was also named Astros team MVP that season, when he batted .250 and achieve career highs in most offensive categories.

In eight seasons in Houston, Metzger was a popular player, setting a NL record with 59 consecutive errorless games in 1976 (since broken). However, Roger batted a collective .229 during this period. As the Astros built towards contention in the late-1970s, Metzger's playing time diminished and he was traded to the San Francisco Giants midway during the 1978 season. Metzger was a valuable man off the bench for the Giants, often splitting time with Johnnie LeMaster in the starting shortstop role.

After leaving baseball following the 1980 season, he and his wife ran a local restaurant for more than 10 years. He graduated with a degree in mathematics in 1972 and taught math for several years at Brenham High School (TX). Today, Roger works as the job procurement officer at the Brenham State School. The school is home to 400 people with mental disabilities from ages 12–82. His wife also works there as a fundraising coordinator.

Why I love this card
I knew nothing about Roger Metzger's accident when I got this card during the summer of 1980. I don't know why I didn't, but I didn't learn about it until much later. Today though, I am much more in awe of what he has done with his life since 1980 than what he did before. There aren't many guys in this set that I can honestly say that about, but Roger Metzger is one.

Something else....
In 2005, Metzger's jersey #14 at St. Edward's was retired, this first in the history of its athletics program. He had already been inducted into the St. Edward's Hall of Fame in 1987, the first year the hall accepted inductees.

On this date in 1980:
Two future professional athletes are born on this day - Michael Vick (insert your own remark here) and Chris Shelton. Shelton will be best remembered for his prodigious home run output early in the 2006 season. Playing with the Detroit Tigers, "Red Pop" hit nine home runs in the first 13 games of the season; this made him the fastest player in American League history to reach that mark at that point in a season. He dropped off quickly though and was not a factor in the Tigers' World Series run that fall. He currently is in the Houston Astros organization trying to return to the majors.
Posted by Dean Family at 3:40 PM