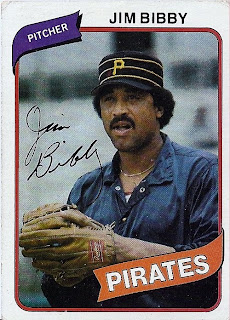 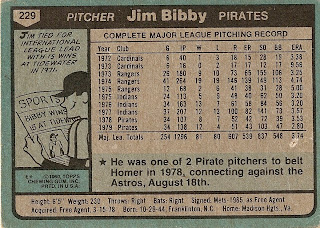 I am sad to report that former major league pitcher Jim Bibby has died. He was 65 years old.

Community Funeral Home in Lynchburg, South Carolina said Wednesday that Bibby died Tuesday night at Lynchburg General Hospital. The cause was not disclosed. The family asked for privacy but said a statement would be released later.

Bibby played 12 years in the majors and pitched the first no-hitter in Texas Rangers history, beating Oakland 6-0 in 1973. He was a member of the Pittsburgh team that won the 1979 World Series, starting two games against Baltimore - including the deciding seventh game.

He also played for St. Louis and Cleveland during his major league years from 1972 to 1984.

Bibby was featured on this blog back in January.

Our sympathies go out to the Bibby family.
Posted by Dean Family at 2:07 PM