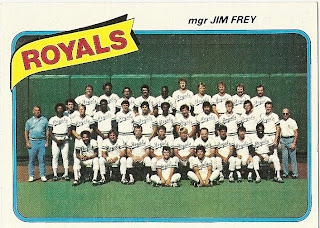 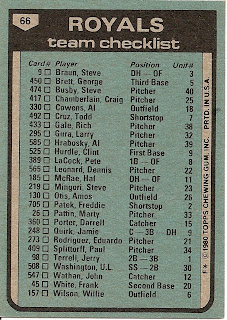 Jim Frey was entering his first season as manager of the Royals in 1980, replacing the popular Whitey Herzog. Herzog had led the Royals to three straight division titles (1976-1978) and finished in second place in 1979, three games out. However, a conflict with management led to Herzog's dismissal. Frey was the hitting and first base coach for the Baltimore Orioles since 1970 and was widely seen as Earl Weaver's right hand man, but he was an unknown. The Royals were expected to contend for the AL West crown, but there was serious concerns about the bullpen and pitching depth.

During the offseason, the Royals traded outfielder Al Cowens to the California Angels for first baseman Willie Mays Aikens. They also did not resign long-time shortstop Fred Patek, instead giving the job to U.L. Washington. They signed former All Star Dave Chalk as a free agent, but added no new pitchers to the staff coming into 1980.

The Royals were one of the best hitting and fastest teams in the AL, and they led the league in batting average and stolen bases. They were led by All Star George Brett, who batted .390 and outfielder Willie Wilson, who had 230 hits, 79 stolen bases and a record 705 at bats. They were supported by solid veterans Frank White, Amos Otis, Hal McRae and All Star Darrell Porter.

The starting rotation was solid, led by the righty-lefty combination of Dennis Leonard (20-11) and Larry Gura (18-10), who was also selected to the All Star Game. The bullpen question was solved by Dan Quisenberry, who appeared in an league-leading 75 games and saved a league-leading 33. Veterans Paul Splitorff and Rich Gale solidified the rotation and the bullpen was aided by Renie Martin and Marty Pattin.

Free agent Jose Cardenal was signed in August and batted .340 to help Clint Hurdle in right and George's brother Ken was signed to help the pitching and did not allow a run in eight appearances.

The Royals won the AL West handily, the only drama of the season was Brett's pursuit of a .400 batting average. They finally defeated their nemesis, the New York Yankees, sweeping them in three games, to win their first AL pennant. The ride came to and end in the World Series, however, when the Royals lost to the Phillies in six games.

Why I love this card
Of course, the obvious. There is no picture of Jim Frey. I don't understand why Topps couldn't have put a photo of him there as he was hired in October 1979 and other manager cards (Dick Howser, Yankees for example) were able to have a picture. You can see Herzog in the front row pretty easily as this is clearly a 1979 team photo. As an aside, eight Royals listed in the 1980 set either did not play for KC that year or did not finish the season with them.

Something else....
When this 1980 Royals team faced the Phillies in the World Series, it was the first time since 1920 that the two teams who squared off had never won a championship. It has never happened since.
Posted by Dean Family at 9:43 PM