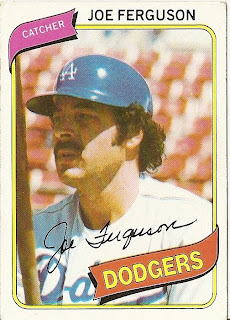 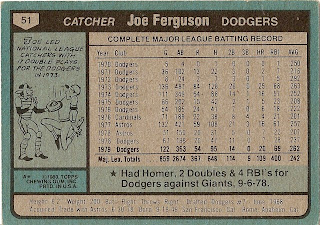 Who was this player?
Joe Ferguson, catcher, Los Angeles Dodgers
A strong-armed right-handed batter, Ferguson was sharing the catching duties with Steve Yeager in 1980, due to an early season injury. It was his second tour of duty in LA, the team that Ferguson broke into the majors with in 1970. While his 1980 season had some and controversy and conflict, he helped the Dodgers to the brink of the NL West title.

Originally drafted as an outfielder, minor league manager Tom Lasorda persuaded him to become a catcher. He toiled with distinction for several seasons in the Dodgers farm system before coming up for good in 1973. In his first full major league season, Ferguson slugged 25 home runs and he received minor consideration for the MVP award. When Yeager also became a regular in 1973, Ferguson shared catching duties and played right field. He helped lead the Dodgers to the 1974 World Series against the Oakland Athletics. Ferguson’s Series was one of extremes and for which he is probably best known.

In the eighth inning of Game 1, Sal Bando tried to tag up on a fly ball. As Jimmy Wynn camped under it, Ferguson sprinted from his position in right field, cut in front of Wynn to catch the ball and heave it to the plate where Yeager makes the tag as the throw just beats Bando. In Game Two, he hit a home run off of Vida Blue that helped the Dodgers even the Series. However, his two errors in Game 3 helped the A’s win a close contest and the A's would take the Series in five games.

His production slipped to 16 home runs in 1974 and a broken arm during a bench-clearing brawl in 1975 began a decline that he was never able to reverse. He was traded to the Cardinals for Reggie Smith in mid-season 1976 and then to the Astros once the season was over. He was traded back to the Dodgers midway through the 1978 season and played in the World Series for a second time. Not hitting well in 1981, Ferguson was released by the Dodgers shortly before they played and finally won the World Series. He signed on with the California Angels where he would spend the remaining time of his 14 year career.

In retirement, Ferguson found a second career in coaching. He coached with the Rangers and Dodgers in the 1980s, and was with LA when they won the 1988 World Series. He was a manager in the Orioles organization for nine seasons and most recently in the manager of the independent Camden Riversharks.

Why I love this card
This is another one of the infamous double printed cards in the 1980 set. But that's not the reason I recall this card so fondly. In my second grade class, we had a kid, Derrick, who was a HUGE Bills fan. Everybody else was typically Cowboys or Steelers and he tried to convince us that his team's quarterback was better. His name, of course, was Joe Ferguson. "Terry Bradshaw is no Joe Ferguson," he would say, "There's only one Joe Ferguson!!" Well, since this card was double printed, everybody and his sister had this triples of this card. We would torment poor Derrick with this card as proof positive that there indeed WAS another Joe Ferguson.

Something else....
The aformentioned DP label. The fifth card overall and fourth out of the last 20. I wonder what the selection criteria was for a card to be double printed?
Posted by Dean Family at 9:14 PM