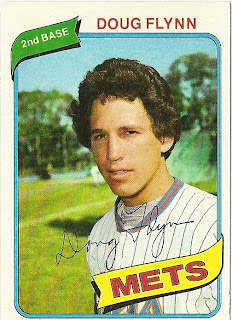 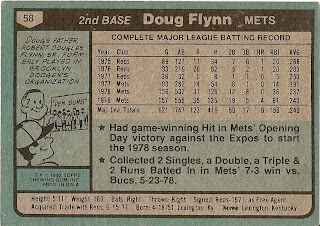 Who was this player?
Doug Flynn, second baseman, New York Mets
This era was a dark time for the Mets as they finished last 5 out of 7 seasons (1977-83). Flynn was one of the brighter spots on the 1980 team that did not finish in last place. Typically batting eighth and playing second base, Flynn was a defensive specialist that saved as many runs with his glove as he drove in with his bat. He was recognized for his prowess at the end of the 1980 season when he was awarded the National League Gold Glove.

The nephew of basketball legend Adolph Rupp, Flynn originally broke in as a member of the Cincinnati Reds. The Reds were ruling baseball at the time as “The Big Red Machine.” He won a World Series ring his first two seasons in the majors, but he was stationed behind the two-time league MVP Joe Morgan. In mid-1977, Flynn was involved in a blockbluster trade with the Mets that brought Tom Seaver to Cincinnati.

In New York, he continued initially in a utility role with the Mets, but became the regular second baseman the following season and appeared in 156 games. He reached career highs in 1979 at bats, hits, doubles and RBIs and would become a popular fixture at second base in New York for the next three seasons. A front office change in 1982 brought about a trade to Texas, where he spent about half a season. He finished the 1982 season in Montreal and was the Expos starter in 1983 & 1984. He was released by Montreal in June 1985 and he was picked up by Detroit where he finished his 11-year career.

After his playing days, He was a coach and manager for the Mets in the minor leagues in 1996 and 1997. In 2000 Flynn became a banker in his hometown of Lexington, Ky. and is a devout Christian. Doug was on hand for the final closing ceremonies at Shea Stadium in 2008 and was honored by his high school in 2009.

Why I love this card
Flynn's hair. It might be a late 1970s New York thing, but he's got the Tony Manero look going on here. I can almost hear "Watch the Hair!"

Something else....
Shortly before Flynn's trade to the Mets, his younger sister disappeared, a case that to this day remains unsolved.
Posted by Dean Family at 4:17 PM