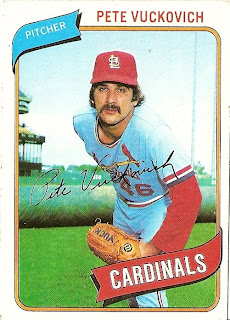 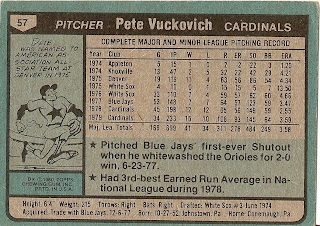 As the 1980 season began, the right-handed Vuckovich was one of the top pitchers in the St. Louis rotation. He would lead his team in innings pitched that season, en route to winning 12 games and finishing fourth in the National League in shutouts. After the season, he was traded to the Milwaukee Brewers in a blockbuster that would be of benefit to both teams.

Originally a member of the Chicago White Sox, his first full season was 1976. He pitched unspectacularly as a swingman and he was left unprotected in the expansion draft and selected by the Toronto Blue Jays. Even though the young Jays lost 107 games in 1977, Vuckovich managed a 7-7 record with eight saves. He recorded the first shutout in franchise history, a 2-0 victory over Jim Palmer and the Orioles. He also recorded the first save in club history.

Involved in a multi-player trade to the St. Louis Cardinals, Vuckovich's career went to the next level. In 1978, he started more often, winning 39 games for the Cardinals in three years. He finished third in the NL in ERA with a 2.55 mark in 1978. His colorful personality and quirky mound antics made him a fan favorite. It was in Milwaukee, however, where he would achieve his greatest success.

With the Brewers, he led the American League in wins (14) during the strike-shortened 1981 season. When Milwaukee won the AL pennant in 1982, Vuckovich won the Cy Young Award. Unfortunately, Milwaukee lost the Series to his old team, the Cardinals, in seven games. It was discovered in Spring Training 1983 that Vuckovich had a torn rotator cuff and had been pitching in pain during his greatest seasons. He skipped surgery in favor of an exercise rehabilitation, but was unable to comeback. He tried valiantly, but by the end of the 1986 season, Milwaukee released Vuckovich ending his 11-year career.

Following his retirement, Vuckovich worked for three years as a sportscaster for the Milwaukee Brewers. In 1992, he was hired by the Pittsburgh Pirates as a pitching instructor. Since then, he worked his way up through the Pirates organization to the position of Assistant General Manager. As of the 2009 season, Vuckovich was serving as a Special Assistant to the General Manager.

Why I love this card
The tarp in the background. It looks like it is on the attack. That and "VUCK" on his mitt. I had to check that twice. I thought for a moment we had a Billy Ripken situation on our hands.

Something else....
For all of his accomplishments, Vuckovich will likely be most remembered as Yankee slugger Clu Haywood in the movie Major League.
Posted by Dean Family at 9:48 PM