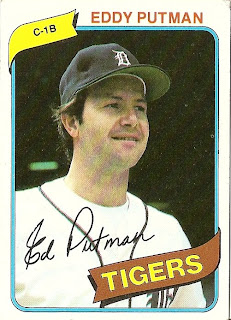 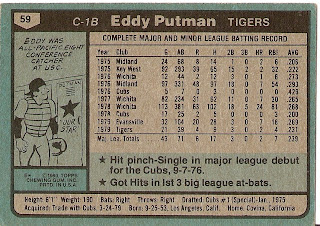 Who is this player?
Eddy Putman, reserve catcher, Detroit Tigers
Putman’s major league career lasted 43 games, 21 of them coming in 1979 with the Detroit Tigers. When the Tigers acquired Duffy Dyer in Spring Training 1980, he failed to make the club since the Tigers now had four players who could catch (Dyer, Lance Parrish and John Wockenfuss). The right-handed hitting backstop never again appeared in a major league game. This is his first and final card.

Eddy William Putman made his major league debut with the Chicago Cubs on September 7, 1976. He singled in his first ever at bat. However, his stint with the Cubs was brief and he did not make the team in 1977. He returned in 1978 and hit .200 in 17 late season games.

He was sold to the Tigers for the 1979 season, where he spent most of the summer on the roster, starting eight games. He was usually behind Parrish who won the job that season, and the versatile Wockenfuss. He was sent down for the 1980 season and eventually traded/sold to the Baltimore chain. Putman was finished with organized baseball after the 1981 season.

Why I love this card
I remember getting this card in 1980 and having zero recollection of Putman the previous season. I recall my Dad saying that he was in the minor leagues, which led to the discussion of what the minors were and why guys were sent there once they made the majors. I distinctly recall my Dad saying something to the effect of “He may get called up again.” Alas, he never did and this card is my only memory of Putman, even for a Detroit kid.

Something else....
In looking back at what I could research on his career, it looked like the numbers game doomed his Tigers’ career. Hit his decently in the minors and in Spring Training, even in the exhibition games the Tigers did with the AAA affiliate (in this case Evansville). He tried playing multiple positions. I have no idea what happened to him after his career ended so any news to that effect would be most welcome.
Posted by Dean Family at 7:21 AM