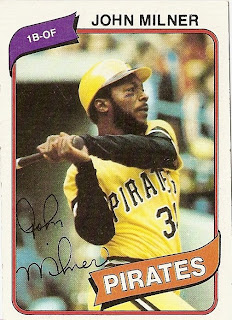 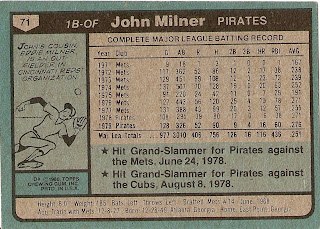 Who was this player?
John Milner, reserve outfielder & first baseman, Pittsburgh Pirates
The left-handed hitting Milner was a key member of the 1979 World Champion Fam-A-Lee Pirates. He platooned with Bill Robinson in left field and often spelled captain Willie Stargell. A similar role was in the cards for 1980, but a injury to Stargell made Milner a regular at first. He slumped badly in '80, dropping 30 points in batting average and his HR/RBI totals were nearly cut in half. Not surprisingly, the Pirates did not earn a return engagement to the postseason.

Taking the nickname "Hammer" after his boyhood hero, Henry Aaron, the Atlanta-born Milner was a draft choice of the New York Mets in 1968. He rose quickly through the Mets farm system, earning a September callup with the Mets in 1971. He was the Mets primary left fielder in 1972 and finished third in the Rookie of the Year voting.

1973 was perhaps Milner's finest season. Now moved to first base, his 23 home runs led the team as the 'Ya Gotta Believe' Mets won the National League pennant. Unfortunately, the Mets lost the Series in seven games, to the Oakland A's. Milner had 20 HR in 1974 and developed was seen as a budding star. However, recurring hamstring problems prevented Milner from achieving that status. Milner was a productive hitter for the Mets throughout the mid-1970s, alternating between first base and left field. After the 1977 season, he was involved in a blockbuster, 10-player, four-team trade. When the dust cleared, Milner was a member of the Pittsburgh Pirates. While serving as a valuable utility player, it was during Milner's time in Pittsburgh that he became a cocaine user. Already a heavy smoker, Milner's substance abuse likely had a hand in shortening his career.

He was traded to Montreal in August of 1981 to bolster the Expos bench as they made a postseason push. He appeared in both the NLDS and NLCS that season in a pinch hitting role. Over his career, Milner thrived in pressure situations, hitting 10 grand slams throughout his career. He began 1982 with the Expos, but was released when he got off to a slow start. He returned to the Pirates to finish the 1982 season and his 12-year major league career.

Milner made headlines in 1985 as part of the Pittsburgh Drug Trials when he named Hall of Famers Willie Mays and Willie Stargell in his testimony. Milner acknowledged his cocaine use, stating that he bought cocaine in a bathroom stall at Three Rivers Stadium before a game in 1980. He also stated that Stargell and Bill Madlock routinely distributed amphetamines. Milner developed lung cancer and died of the disease one week after his 50th birthday in 2000.

Why I love this card
Because it reminds me of how naive I was at the moment I got this card. Looking at it now, I feel sorry for John Milner, how he died so young, how his play was effected by drugs. At the time, he was simply a Pirate - my favorite NL team. He had the gold uniform, the Stargell stars, the vicious swing. He was a ballplayer. I had no concept that he (like all of these players) was a human being too.

Something else....
It took 70 cards, but Milner is the first player to be featured that is no longer with us. Accordingly, I have added a label so going forward they will be grouped together. It is also a double printed card as well.
Posted by Dean Family at 10:18 PM