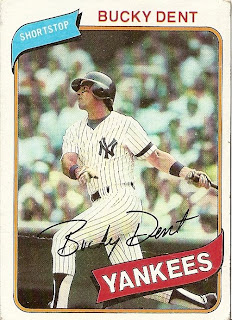 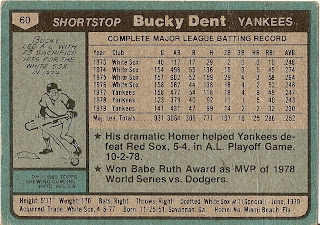 Who was this player?
Bucky Dent, shortstop, New York Yankees
Entering the 1980 season, Dent was coming off a tumultuous 1979 season that saw him experience marital problems, a season-long slump and become a media sensation and poster boy. His agent, future NFL Hall of Famer Nick Buoniconti, negotiated a new contract in the off-season and Dent responded strongly and was elected to the All Star Game. He raised his average 30 points from the previous season and helped the Yankees win the AL East for the fourth time in five years.

Born Russell Earl O'Dey, he was raised by an uncle and aunt who adopted him and he took the name Dent. He was drafted by the Chicago White Sox in 1970, and called up during the 1973 season. He became the team's regular shortstop the next year and over the next three seasons established himself as a scrappy, sure-handed infielder, even making the All Star Game in 1975.

He came to the Yankees prior to the 1977 season and landed in the fabled “Bronx Zoo.” The Yankees won the World Series and the following year, they came back from 14 games back in July to win the division again. Dent’s career defining moment came in that AL East playoff game against the Boston Red Sox. He became Bucky “F-ing” Dent for his famous home run and followed it up with an MVP performance in the 1978 World Series. He capitalized on the media attention of his memorable October with commercials and personal appearances.

Dent was again elected to the start the All Star Game in 1981, but soon found himself on the outs in New York, who traded him to Texas for Lee Mazzilli in mid-season 1982. He was the Rangers’ regular shortstop in 1983, but they released him prior to the 1984 season. He played the end of the ’84 season with the Royals before retiring as an active player. It was during the summer of 1984 that Dent also filmed and later appeared as an extra in the movie “The Slugger’s Wife.”

After his playing days, Dent became manager of the Yankees for the end of 1989 and start of 1990. He was a coach for the Cardinals, Rangers and bench coach for former teammate Jerry Narron in Cincinnati. Today, he runs a baseball academy with minor league teammate Larry Hoskin.

Why I love this card
When I noticed the crease in this particular card, it triggered a long-forgotten memory of how I got it. Louie down the block was from New York and moved on our street in 1978. His aunt was visiting when I made a trade for this Dent card. When she saw that I now had the card in my possession (I think for a Mitchell Page) she smacked him in the back of the head and screamed “YOU CAN’T TRADE BUCKY DENT!” It scared me initially, as this crazy lady was really angry over a Dent card. However, whenever any of got a Dent card, sticker, slurpee cup from that point forward, it invariably invoked a chorus of “YOU CAN’T TRADE BUCKY DENT.” Completely forgot about that.

Something else.....
The Bucky Dent baseball school has been operating for 30 years. To give you an idea of how long that is, one of its former students is Jamie Moyer, currently in his 23rd Major League season.
Posted by Dean Family at 10:06 PM