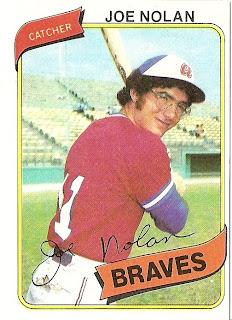 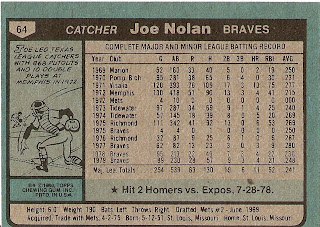 Who was this player?
Joe Nolan, reserve catcher, Atlanta Braves
When the 1980 season began, the Braves were carrying three catchers on their roster. Nolan began the year as the backup to Bruce Benedict. When former All Star Biff Pocoroba came off of the disabled list in June, the Braves attempted to send Nolan to the minor leagues. Since he had five years of major league service, Nolan refused. The Braves front office told Nolan that they were unable to trade him since there were no suitors so Nolan was declared a free agent. He was signed with the Cincinnati Reds the following day and batted .312 for the remainder of the season.

Joe Nolan is one of the few players in major league history to wear glasses behind the plate. Originally drafted by the New York Mets in 1969, the left-handed hitting Nolan spent nearly eight seasons in the minor leagues working his way up the ladder. Even though he achieved All Star status in the minor leagues, the Mets traded him to the Braves in 1975. It was with Atlanta that he finally made the major leagues in 1977.

While primarily a reserve in Atlanta, a memorable moment with the Braves came when Nolan caught a foul tip off the bat of Pete Rose that ended Rose’s 44-game hitting streak. He remained a substitute until the time of his free agency in 1980. The Reds were looking to extend the career of Hall of Famer Johnny Bench and Nolan became the everyday catcher for the only time in his career in 1981 and again batted over .300. However, Nolan’s defense was suspect and when the Reds acquired Alex Trevino, Nolan was traded again this time to the Baltimore Orioles.

In Baltimore, Nolan received his only taste of the postseason when the Orioles won the AL East in 1983. He appeared in the ALCS and World Series that season as the Orioles defeated the Phillies in five games to win the World Series. Nolan remained an Oriole for two more seasons until he was released at the end of the 1985 season after 11 years in the major leagues.

Why I love this card
Nolan is probably one of the least likely looking baseball players in this set. Not to be disparaging to a man with a decent career and a World Series ring, he just didn't look like a ballplayer to me. I know that sounds like a backhanded compliment but its not meant to be. Maybe its because it looks as if no one even cared to put his name on the back of his warmup jersey.

Something else.....
In researching Nolan's career I found that had one of the worst ratios for throwing out base stealers (about 20%). However, a few years ago, I sent him an autograph request through the mail and included 5-6 cards, asking him to keep some if he wished. He signed them all with a beautiful signature (much better than the facsimile 1980 card). Thanks Mr. Nolan for 100% success rate with me.
Posted by Dean Family at 7:27 AM