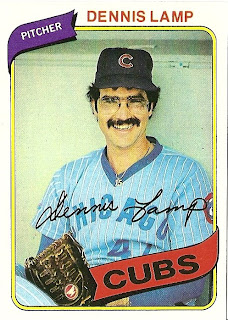 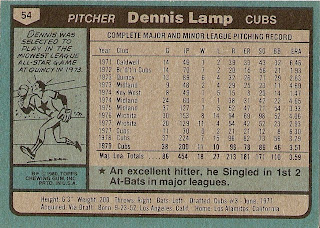 Who was this player?
Dennis Lamp, starting pitcher, Chicago Cubs
Though not immediately remembered today, Lamp began his career as a durable starting pitcher in the Chicago Cubs rotation. He was a solid #3 starter who in 1979 led the rotation in ERA while posting 11 wins. Even though he started 37 games in 1980, his ERA jumped more than two runs a game (5.20) and he led the league in earned runs allowed. This likely put the right-hander on the trading block by the end of 1980.

During his 16-year career, Lamp began as an effective starting pitcher, transitioned to a closer role and became a dependable set-up man throughout the 1980s. He toiled for seven years in the Cubs minor leagues before finally making the Cub rotation in 1978. That year he finished 7-15, but he received little run support as evidenced by his 3.30 ERA. He also pitched a one-hitter during his rookie year, against the San Diego Padres. Traded to the White Sox in 1981 Spring Traning, Lamp began the transition into the second phase of his career.

With a young rotation already in place, Lamp was a valuable swingman who pitched out of the bullpen and starting occasionally, even pitching another one-hitter in the process. By 1983, the White Sox were contending for the AL West title and Lamp was the standout in Tony LaRussa’s “bullpen by committee.” Even though he led the team in saves, the White Sox were unable to advance to the World Series. His versatility in Chicago led to a contract offer from the Toronto Blue Jays who signed Lamp as a free agent. There, he was exclusively a set-up man and in 1985, finished a perfect 11-0 as the Jays won the AL East and Lamp received minor MVP consideration. Again, however, his team was unable to make it to the World Series as Toronto fell in seven games.

His ERA ballooned in 1986 and he was not resigned by the Jays. His career appeared over in 1987 when he was unable to make the Cleveland Indians in Spring Training and did not pitch well for the Oakland A’s, logging two consecutive seasons of an ERA over 5.00. The Red Sox took a chance and signed him as a free agent and he made the club. He helped the Sox reach the ALCS in 1988 and posted the best ERA of his career in 1989. The Red Sox returned the ALCS in 1990 again with Lamp serving a prominent role in the bullpen as a set up man. He pitched four seasons with the Red Sox, the longest he pitched with any one club. At age 39 he was given a brief opportunity in Pittsburgh before his major league career ended in 1992.

Today, he makes his living with a career in sales. He was even a workhouse in this industry, taking the majority of telephone calls in Dave Winfield’s ill-fated "Call of Fame" project.

Why I love this card
No, it's not the Cubs road uniform, although it is awesome. No, it's not that Lamp has the creepy smile like someone told him a Nantucket joke. No, it's not because he looks like Goof Trupiano (that's for you Harlem). I love this one because I am intrigued by Lamp's #15 necklace. What meaning could that have had? It wasn't his number. It was the total amount of losses he had in 1978, but I can't imagine that would be what its for. Now that would be funny. Maybe that's why he's laughing.

Something else....
Lamp also was part of the destiny of two Hall of Famers. First, he was the pitcher that allowed Lou Brock's 3000th hit in 1979. Additionally, his departure from the White Sox in 1983 brought Tom Seaver to Chicago. Since Lamp was a "Type A" free agent, the White Sox could select an unprotected player to replace him. Seaver was unprotected by the Mets when they mistakingly thought that no team would selecet him.
Posted by Dean Family at 4:48 PM