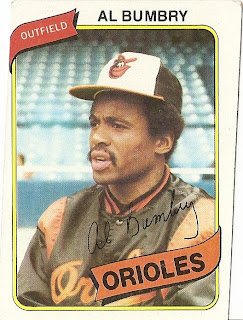 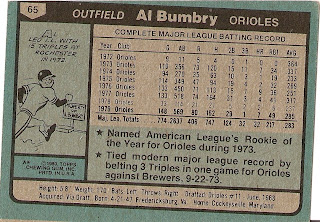 Who was this player?
Al Bumbry, centerfielder, Baltimore Orioles
The fleet, left-handed hitting Bumbry was the leadoff man and centerfielder for the defending AL Champion Orioles. In 1980, Bumbry had a career year, achieving highs most offensive categories. He was third in the AL in runs scored (118), fifth in hits (205) and games played (160) and ninth in batting average (.318). He was elected to his first and only All Star Game that summer. The 1980 Orioles won 100 games that season, but finished second in the East to the New York Yankees.

Alonza Benjamin Bumbry was drafted by the Orioles in 1968, but his minor league career was interrupted by a tour of duty in Vietnam. He was a lieutenant and platoon leader and won the Bronze Star, which is given to soldiers for “heroic or meritorious achievement or service.” Upon completion of his service, he arrived with the Orioles in 1973 and promptly led the league in triples and batted .337. The Birds won the AL East that season and Bumbry was rewarded with the Rookie of the Year Award. He would play in the ALCS in 1973 and 1974, but both times the Orioles lost to the eventual World Champion Oakland A's.

He would become a fixture in the Baltimore Orioles lineup for the next decade. Along the way, he consistently placed on the AL leader list in stolen bases and finished 7th in batting in 1977 when he hit .317. The only interruption during his time with the Orioles came in 1978 when he suffered a broken leg and ligament damage to his ankle.

The following year, at full strength, he helped spark the Orioles to the 1979 World Series, which they unfortunately lost to the Pittsburgh Pirates in seven games. Despite the loss, Bumbry was one of the most popular players on the team and a fan favorite. He continued to be a reliable weapon in the Oriole attack and hit .275 in 1983, the year the Orioles finally won the World Series, defeating the Philadelphia Phillies in five games. When he was not offered a contract after the 1984 season, the 38-year old Bumbry signed on with the San Diego Padres where he played his final season in 1985, wrapping up his 14 year career.

Bumbry remained active in the game after his playing days, serving as first base coach for the Boston Red Sox and later with the Baltimore Orioles. He was elected to the Orioles Hall of Fame in 1987 and remains third all-time in Orioles franchise history in stolen bases.

Why I love this card.....
Do not adjust your sets, we have our first miscut card of the series. I don't know why, but I liked to get cards like this from time to time. To add to the theme, check out Bumbry's hometown on the reverse: Cockeysville, Maryland. Fitting.

Something else....
It was kind of glossed over earlier, but special thanks to Mr. Bumbry for his service and sacrifice for our country. Many of the WW2 era players get a lot of publicity (and rightfully so) for putting their careers on hold, but we don't get as much emphasis on the Vietnam era guys. I never knew that Bumbry led a platoon and something tells me I should have before this blog entry. Nonetheless, thanks from someone who has benefited from your commitment.
Posted by Dean Family at 9:45 PM