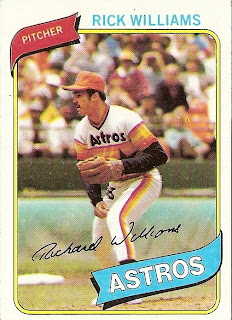 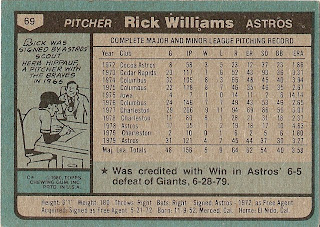 Who was this player?
Rick Williams, swingman, Houston Astros
Williams did not appear in the major leagues in 1980. The tremendous pitching depth of the Astros that season prevented Williams from returning to the majors, even after the stroke of staff ace J.R. Richard. Williams had a decent 1979 season in which he was fifth on the team in starting assignments, winning 4. The off-season acquisition of Nolan Ryan undoubtedly left Williams the odd man out in Houston's 1980 pitching plans.

Signed by the Astros as an amateur free agent in 1972, Williams spent five seasons in the minor leagues working his way up the Astros chain. He pitched well in his minor league career, and gained attention from the parent club when he posted nine wins and a 3.01 ERA with the Charleston Charlies. He made the Astros staff in June of 1978 after a hot start in Charleston and won in his major league debut. With the exception of one game, he pitched entirely out of the bullpen for Houston.

He began the 1979 season again in the minors, but was quickly recalled to Houston in May of 1979. He was inserted into the starting rotation due to injuries to Vern Ruhle and Ken Forsch. Williams made 11 starts in a row from mid-May to early-July, going 3-4 in the process, two of the wins being impressive, complete game shutouts. When his teammates returned from the DL, Williams was shifted to the bullpen. He returned to the rotation for the stretch drive as the Astros contended for the NL West crown, but both he and the Astros faded as Williams went 1-3 in four late-season starts.

Williams spent all of 1980 at AAA Tuscon, winning 14 games as the Astros won the NL West. However, his high ERA (5.03) did not earn him a return engagement as the Houston battled the Dodgers to the final day. He spent two more seasons before finally ending his professional career.

Why I love this card
Williams' minor league record is more accurate on this card than it is over at baseball-reference.com. There is no on-line mention of 8-1 start in 1978.

Something else....
I know that I have previously expressed my unhealthy love to the Astros uniform of this era, and here it is again. That's three Astros cards so far in this set and the whole rainbow uni is on full display. No head shots here, no sir. Wear that orange with pride!
Posted by Dean Family at 9:30 PM