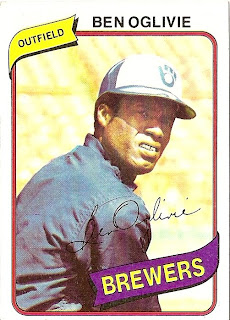 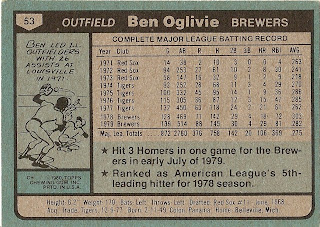 Who was this player?
Ben Oglivie, leftfielder, Milwaukee Brewers
After nine seasons in the majors, Oglivie was blossoming as one of the premier power hitters in the game when this card was issued. After achieving career highs in most offensive statistics in 1979, he had a breakout season in 1980, leading the American League with 41 home runs. He started in left for the AL at the All Star Game and finished the year with a .304 average and 118 RBI.

Originally drafted by the Boston Red Sox, “Benji” made his major league debut in 1971 but was unable to crack the regular lineup and was traded to the Detroit Tigers after three seasons in Beantown. While his playing time increased each year he was in Detroit, he was alternated between several positions and was unable to find a permanent spot in the field. At the conclusion of the 1977 season, he was traded to Milwaukee for pitcher Jim Slaton and was put in left field. He stayed there for seven seasons.

Oglivie’s arrival in Milwaukee coincided with the Brewers rise in the standings. In his first year, the Brewers won 93 games and they were immediately tabbed as a contender. It would take a couple of seasons for the Brewers to claim that elusive title, as they began to add pieces to a championship puzzle. In 1981, the players strike created an odd playoff structure in which there would be two champions in each division and they would play for a spot in the LCS. The Brewers won the second half of the AL East, but lost the series to the Yankees in five games.

The following season was the greatest in Brewers history and Oglivie was in the center of Milwaukee’s success. Even though his batting average dropped, he still hit 34 home runs and drove in 102, but it was his glove that made the most memorable play of the Brewers’ season. The Brewers and Orioles entered the final day of the season in a dead heat for the AL East title. The Orioles hosted the Brewers with the winner claiming the title. Tentatively holding on to a 5-2 lead in the eighth inning, Oglivie made a spectacular diving catch with two on and two out to preserve the lead. The Brewers went on to not only win the game, but the American League pennant by defeating the Angels in five games.

He was an All Star twice more while in Milwaukee (1982, 1983) but by 1985 he had lost his starting position. He would finish his major league career in 1986 after 16 seasons. Today, his name is still prominent on the Brewers’ franchise career leaders, including 5th all-time in home runs and RBI. He played two more seasons in Japan before leaving organized baseball.

Why I love this card
Anyone remember this commercial? If you are a dude, you would have no reason to. We used to play a game where we would flip the cards and you had to copy the players stance. Louie down the street could copy Oglivie perfectly and for some reason would use this commercial as the backdrop. It got to the point where we would have him copy the stance and do a stupid imitation of the commercial just for laughs. This card makes me think of that.

Something else....
After that silly story, what else more could I add? However, I will add that last season, Oglivie was a coach for the Montgomery Biscuits. How cool is that name? Today, he is the hitting coach for the less-spectacularly named Gulf Coast Rays.
Posted by Dean Family at 10:17 PM