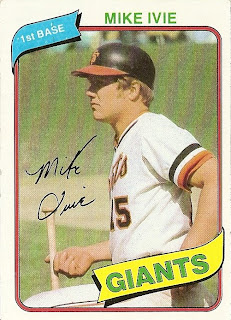 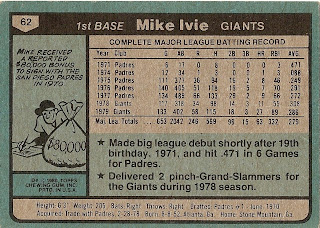 Who is this player?
Mike Ivie, first baseman, San Francisco Giants
Ivie's emergence as a power hitter in 1979 (27HR 89RBI) fully established him as the Giants everyday first baseman and in essance retired legend Willie McCovey. However, the comfort of finally establishing himself as a regular did not last long. First, he sliced a finger in the off season with a hunting knife. Next, there were ankle injuries. Then, Ivie's 1980 season was interrupted by a shocking retirement. Citing a displeasure with travel and missing his family, his retirement lasted three weeks and he eventually returned. However, Giants management soured on him and he never found a consistent rythm, finishing the year with just four home runs.

The first overall pick of the 1970 amatuer draft by the San Diego Padres, the right-handed hitting Ivie was a highly touted catching prospect. When he made his major league debut late in the 1971 season, he was the second youngest player in the league that season. The following year began a series of mental blocks and injury caused Ivie to be moved to other positions, namely third and first. He became the Padres regular third baseman in 1975 and made the Topps All Rookie Team.

Ivie had solid seasons in San Diego in 1976 and 1977, but Padre management grew impatient with Ivie and he balked when they asked him to return to catching. He was traded to the Giants for Derrel Thomas on February 28, 1978. Ivie hit a career-high .308 for the Giants in 1978 as a backup. Ivie was a useful pinch hitter. He went 12-for-31 in the pinch and tied a major league record with two pinch grand slams that season. One, a May 28th blast against the defending NL Champion Dodgers, was voted the top 1970s moment by Giants fans in 2003.

While his pinch-hitting performance eventually won him a job, the Giants still attempted to trade Ivie, in a deal for Rod Carew that eventually fell through. Shortly after the 1981 season began, the Giants did finally trade Ivie, to the Houston Astros. He only appeared in a handful of games for the Astros in 1981 and in 1982 he asked the Astros to be released and they complied. He came to the Detroit Tigers that season and while he showed some pop in his bat, his batting average hovered at the .230 mark. When he started slow in 1983, Detroit released him and he retired shortly thereafter, completing a 11-year career.

Why I love this card
When Ivie came to the Tigers in 1982, I remember my Dad being excited by this acquistion. At the time, the Tigers were stuggling for a regular first baseman and Dad (perhaps blinded by the 1979 Ivie) convinced me that this was a great move. I was even told to "save his baseball cards." Alas, Dad missed this one, but this particular card had been in a plastic sheet since the summer of '82.

Something else....
Ivie developed a mental block about throwing the ball back to the pitcher that ended his catching career (something similar also happened to Dale Murphy). Ivie was so adament about not catching that he had it inserted into his contract that he could not be asked to catch.
Posted by Dean Family at 8:43 PM