A couple of things led me to this particular post; first, the induction of Whitey Herzog to the Baseball Hall of Fame. In looking back at some of those Cardinal teams of the 1980s, I remain amazed that Herzog got those teams as far as he did. I had forgotten his role as GM and principal architect of the team.

Second, yesterday's post on Sixto Lezcano reminded me of one of the biggest blockbuster trades of my childhood, between the Brewers and Cardinals on December 12, 1980. The Cardinals traded Ted Simmons, Pete Vuckovich and Rollie Fingers to Milwaukee in exchange for Lezcano, Lary Sorenson, Dave LaPoint and David Green. The trade was largely responsible for both teams making the World Series in 1982.

In additon to an addiction to baseball cards, I also have a (ahem) "problem" with collecting baseball-related magazines, newspapers and books. Many of these I have used in my research on some of the players in this blog. One such article comes from the old "Inside Sports" magazine, in their 1981 baseball preview issue.

In it, is a great article titled "Swapped," written by Daniel Okrent, the founding father of fantasy baseball. It is a very detailed and descriptive account of the four days that led up to this trade and all of the possibilities considered by GMs Harry Dalton of the Brewers and Whitey Herzog of the Cardinals. The magazine even had Whitey pose for this picture for the article: 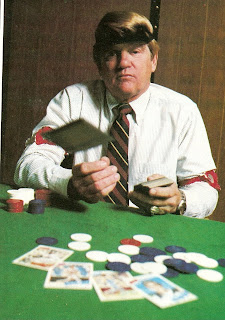 Notice the 1980 baseball cards Whitey is flipping in the picture (albeit blurred). How cool is that? I think two of them are Rick Miller and Fred Howard, but I'm not positive.

Anyway, the article mentioned some interesting items. Some I recall, some I did not:

* The week began with St. Louis signing free agent Darrell Porter and announcing an 11-player trade with the San Diego Padres that netted them Rollie Fingers.

* The Cardinals had three catchers (Porter, Gene Tenace and Simmons) along with two Hall of Fame closers (Bruce Sutter and Fingers) at the same time.

* The Cubs almost traded Sutter to the Brewers stright up for Paul Molitor. When Dalton called for a vote among his baseball men, it was tied 4-4. He slept on it and decided against it the next day.

* Herzog originally had no intention to trade Simmons. He wanted to move him to first and play Keith Hernandez in left field. Simmons didn't want to play first full-time.

* Milwaukee almost traded Sixto Lezcano to the Orioles for Dennis Martinez and Sammy Stewart, but the Orioles backed out.

* Gorman Thomas was discussed, to San Francisco for Gary Lavelle and John Montefusco. When the Giants wanted another player, Milwaukee declined.

* I forgot how highly regarded David Green was. In the article he is compared favorably to Roberto Clemente, Willie Mays and Pete Rose in one paragraph.

* Herzog approached the Brewers about Simmons. They didn't know he was avaialable.

* Simmons negotiated with Milwaukee regarding his ability to veto a trade. While they were doing so, Herzog reportedly had another deal on the table with the Yankees that included Ron Guidry. Of course, Simmons agreed to the trade and Guidry stayed in New York.

All in all, it was a fascinating read from the viewpoint of two general managers and the thought processes that led up to a big trade. You don't see that kind of depth so much in journalism anymore.

We now return you to regular programming.....
Posted by Dean Family at 1:32 PM