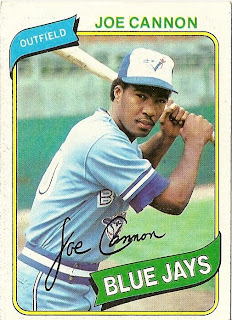 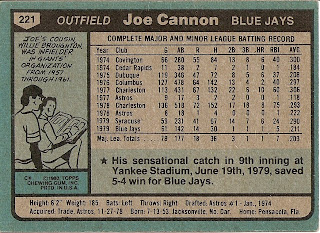 Who is this player?
Joe (J.J.) Cannon, outfielder, Toronto Blue Jays
A strong Spring Training earned the lefthand hitting Joe Cannon a spot on the Toronto Blue Jays roster in 1980. He was used sporadically, mainly as a pinch runner, thanks to his tremendous speed. J.J. did not notch his first base hit until June 17th. Cannon appeared in 70 games in 1980 and batted a meager .080. He scored more runs (16) than he had hits (4). J.J. did not return to the major leagues after the year, ending his four-year career.

The Camp Lejeune, North Carolina native, Cannon was the son of a retired marine who gave his son a passion for sports, specifically baseball. He was drafted in the first round of the 1974 amateur draft out of Pensacola (FL) Junior College. Cannon established himself as a prospect in the Astros organization, batting no less than .290 in four straight minor league seasons. He was given two brief looks at the end of the 1977 and 1978 seasons, appearing in only 17 games.

However, the Astros included him in a package following the 1978 season in a trade for catcher Alan Ashby. He split time between Toronto and Triple-A in 1979, batting .211 with the Blue Jays. In 148 big league games, he batted .176 and returned to the minor leagues for the final three seasons of his professional career (1981-1983).

Following his playing days, Cannon began a long career as coach and manager. He managed for 11 season at the Rookie and Single-A level for the Blue Jays, being named Manager of the Year for the New York-Penn League in 1993. He returned to the Astros organization in 2001 where he spent six seasons in several coaching capacities. He moved on to the Orioles organization in 2007 and has spent the last three years coaching with the Frederick Keys.

Why I love this card
At this stage in my life, I didn't understand the difference between minor league and major league baseball. When I saw a guy do well in the minors, it didn't make sense to me why they couldn't do the same at the major league level. It seemed unfair to see the .300 averages scattered in his batting record with a bottom line of .203.

Something else....
Not only is this Cannon's rookie card, but it is his only card. So far in the 1980 set, he is the fourth card to have that distinction (Eddy Putman, Fred Howard and Tony Brizzolara)
Posted by Dean Family at 10:50 AM