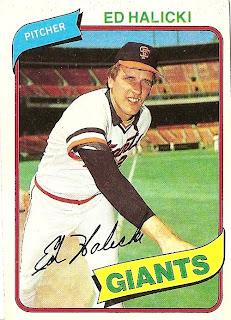 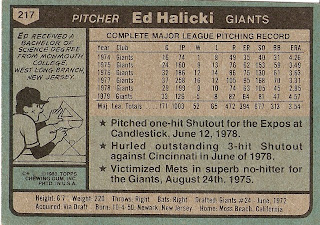 Who is this player?
Ed Halicki, starting pitcher, San Francisco Giants
After nearly a year of injuries, disappointments and public complaints, Ed Halicki's welcome was just about worn out as the 1980 season began. The imposing 6'7" righthander feuded with Giants brass over his role on the pitching staff and he began the year in the bullpen. He did not pitch well, yet continued to criticize management in the press. Tired of his antics, he was sold to the California Angels in June. He finished the 1980 season in Anaheim in what would be the seventh and final season of his major league career.

A graduate of Monmouth University in West Long Branch, New Jersey, Ed Halicki was a two-sport college star in baseball and basketball. He scored 1,777 career points with over 1,500 rebounds and still holds the school record with 40 rebounds in a single game. He chose a career in baseball when he was drafted by the San Francisco Giants in 1972. He quickly worked his way through the bush leagues and made his debut two years later.

The following season, 1975, Halicki achieved his greatest individual feat by pitching a no-hitter on August 24. Although he was in the midst of a 9-13 season, the general consensus was that Halicki was part of a group of young pitchers that would lead the Giants into contention. By 1977, Halicki was the Giants most effective starting pitcher, leading the team in victories, ERA and innings pitched.

Things came together briefly for the Giants in 1978 as San Francisco led the NL West for most of the season before finally fading. Halicki was part of the team's strength, starting pitching. He pitched a one-hitter that year and was ninth in the NL in ERA. However, Halicki and the Giants were unable to recapture that magic as the 1979 season imploded among injuries and dissension. Halicki spent part of that year on the DL, feuded with manager Joe Altobelli and was fined for drinking on a team flight. He finished 5-8 with a 4.68 ERA.

Halicki tried catching on with the Philadelphia Phillies in 1981, but was released near the end of Spring Training. He pitched in the Senior Professional League in 1989-90 and was a fixture at Giants Old Timers events and the closing of Candlestick Park in 1999. He was inducted into the Monmouth Sports Hall of Fame in 2007.

Why I love this card
I always loved this version of the Giants hat. Something about the two-toned cap with the orange bill appealed to me. However, Halicki looks like he put on a kid's cap for his 1980 picture - it appears way too small. I always wanted this hat when I was a kid, never did get it.

Something else....
In reviewing Halicki's career, in hindsight, I can't imagine why he was so insistent on ripping the Giants' managers, GM and organization as a whole. Back then, "outspoken" was often used as code for "pain in the a**." Halicki must have known that his performance on the mound combined with his mouth was not reflecting well on him and sure enough, he was out of the bigs by age 30. I never understood why athletes, both then and now, would do that.
Posted by Dean Family at 11:10 PM