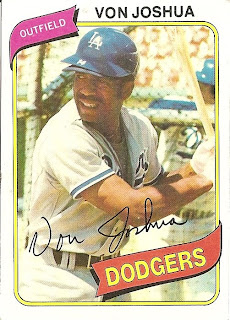 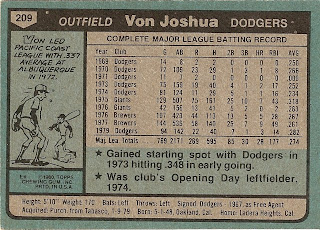 Who is this player?
Von Joshua, outfielder, Los Angeles Dodgers
In the final season of his 10-year major league career, Von Joshua spent the 1980 season with the San Diego Padres. Used primarily as a pinch-hitter for most of his tenure as a Padre, he batted .238 in 53 games. On August 8th, Von had a pinch-hit double against the division-leading Houston Astros that tied the game and scored the go-ahead run in San Diego's 5-3 victory. Unfortunately, Joshua was released two days later and was not picked up by another team.

The Oakland, California native grew up an avid fan of the Los Angeles Dodgers, so much so that when he was selected by the San Francisco Giants out of high school he refused to sign. After a year in college, he attended a 1967 Dodger tryout camp and impressed enough to be signed by Los Angeles. The left-handed hitting Joshua was part of a very deep Dodger farm system that produced several future major league players. At one time, Joshua was considered one of the brighter prospects, twice winning minor league batting championships and being named a minor league All-Star.

Joshua made his major league debut in late-1969 and spent his first full major league season with Los Angeles in 1970, mainly as a defensive replacement. He appeared in only a handful of games in 1971 and played the entire 1972 season in the minors and Dominican League winning batting championships in both leagues. It was this experience that convinced Joshua that he could be an everyday player if only given the opportunity, an opinion that he began sharing in the media.

He was given the starting left field job and was batting .333 two weeks into the season before a broken wrist cost him a month's worth of playing time. When he returned, he had lost his starting job and spent the next two seasons on the Dodger bench. Von appeared in his only World Series in 1974, appearing in four games as a pinch-hitter as the Dodgers fell to the A's in five games. Frustrated by his lack of playing time, he asked Dodger management to be traded. In January, 1975 Los Angeles traded him to the San Francisco Giants in a move that would rejuvenate his career.

Joshua had the best season of his career in 1975 when he finished seventh in the National League with a .318 average. He also placed in the Top Ten in triples (10). However, he didn't get along with manager Bill Rigney and was sold to the Milwaukee Brewers in June, 1976. He was the Brewers' regular centerfielder for two seasons but again didn't get along with his manager (George Bamberger) and was released near the end of Spring Training in 1978. Unable to land a job in the majors, he spent the season in the Mexcian League and his performance there earned a contract with the Dodgers in 1979. After his playing days, he spent 25 years as a coach, most recently as the Chicago Cubs hitting coach for the 2009 season.

Why I love this card
Today, you never, I mean, never see a guy with his cap under his batting helmet like Joshua is pictured here. Even in 1980, Joshua wasn't unique in doing this as several players (Willie Stargell, Carl Yastrzemski) used to do it. I really tried to emulate this but hated how it felt. I still can't understand how guys could hit with both on, it felt like you had a football helmet on your head.

Something else....
I don't know what circumstances led Joshua to Michigan, but he lives in a suburb of Detroit; South Lyon, Michigan. Several years ago, I had the good fortune of meeting him at a sparsely attended card show in the dying days of the Livonia Mall. There weren't many people there, and he was very gracious of those of us who were there, sharing stories of his major league days, especially with the Los Angeles Dodgers.
Posted by Dean Family at 11:28 PM