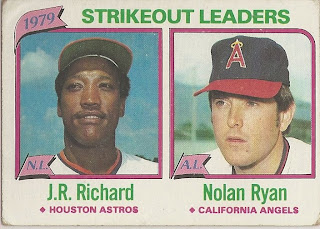 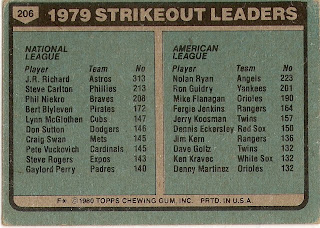 What is this card?
1979 Strikeout Leaders Card
J.R. Richard had completed one of the most dominant seasons of the post-expansion era in 1979. His 313 strikeouts had established a National League record for righthanded pitchers, breaking his own record of the previous year. When this card came out, it was the seventh time that Nolan Ryan led the league in strikeouts. He left the Angels after the season and in 1980 both of these guys became teammates.

How was the race? Richard was, far and away, the most dominant strikeout pitcher in the game at this time, including Nolan Ryan. He outdistanced his closest pursuer in the NL by over 100 strikeouts and was never challenged. Ryan, meanwhile, led the American League for nearly the entire season with nine first-half starts of 10+ strikeouts. He withstood a late-season surge by Ron Guidry of the Yankees who struck out 10, 11 and 11 in three of his final five starts.

Where are the 1980 League Leaders? Len Barker of the Cleveland Indians, who led the American League with 187 punchouts, is not listed here on this card. Meanwhile, Steve Carlton of the Phillies led the National League in 1980 and was runner-up to Richard in 1979.

Did these players ever repeat? Yes and No. Richard didn't pitch again after 1980 due to his career ending stroke. Ryan would go on to add to his Hall of Fame career by leading the league in strikeouts four more times. Amazingly, he would do so at ages 40 through 43 for the Houston Astros and Texas Rangers.

Why I love this card
As mentioned, the fact that Richard and Ryan were teammates made this a very popular card that summer. Luckily, I had two of these that year, and it was one of the few cards that I had that I refused to trade. It was the reason that I rooted for the Astros that season

Something else....
Largely forgotten today, but a rotation of Ryan, Richard and Joe Niekro was pretty awesome. Had it not been for Richard's misfortune, one wonders how well the Astros would have really done in 1980. Sports Illustrated also speculated this in 1993 and a reprint of that article can be found here.
Posted by Dean Family at 9:55 PM