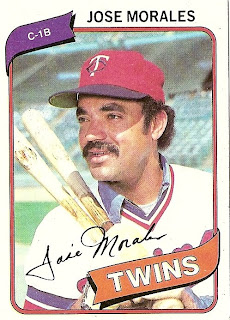 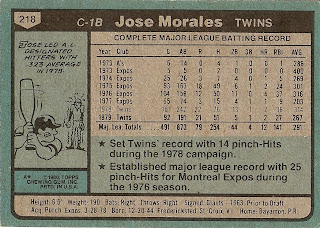 Who is this player?
Jose Morales, utility player, Minnesota Twins
Although the position flag on this card lists Jose Morales as a catcher/first baseman, his primary position in 1980 was designated hitter. Also used as a pinch-hitter, Morales led the league with 13 pinch hits, the third time he had done so in his career. His average remained over .300 for most of the season, topping out in early June when he reached .375. Jose also hit a career high eight home runs, including a grand slam against the Tigers and a two-homer, 6 RBI performance in July. In December, he signed a free agent contract with the Baltimore Orioles.

Born in Frederiksted, St. Croix, the small Virgin Island is linked closely to its larger neighbor, Puerto Rico. The righthand hitting Morales was like many boys, playing on the sandlots year round, honing his craft. He attracted the attention of scouts for the San Francisco Giants, who signed him in 1963. Jose began a long journey to the major league, playing in the minor leagues for four organizations for ten seasons. He finally made his debut with the Oakland Athletics in 1973, moving on to the Montreal Expos later that season.

Morales was a tireless student of the game that played winter ball in Puerto Rico every season of his professional career. He never developed as a solid defensive player, leading four different minor leagues in errors. Jose had his breakout season in 1975 and was a .289 hitter in his five seasons in Montreal. Morales went on to set the pinch-hit record of 25 hits in 1976, breaking the single-season mark en route to a .316 season. He was sold to the Minnesota Twins in March of 1978.

He led the league in pinch hits during his first season with the Twins where he solidified his role as clutch hitter and part-time DH. He was a .297 batter in three seasons in Minnesota before moving on to Baltimore (1981-1982) and then to the Los Angeles Dodgers (1982-1984). He saw his only postseason action as a Dodgers, appearing in the Dodgers' four game defeat in the NLCS. Upon his retirement, he was the third most prolific pinch hitter in baseball history (he currently stands eighth with 123 pinch hits).

He immediately became a coach at the end of his playing days, first with the Giants, then moving on to the Indians and Florida Marlins. Several All-Stars and MVPs (such as Wally Joyner, Will Clark, Kevin Mitchell and Kenny Lofton) directly credit Morales. He has been offered coaching positions in recent years but has turned them down, instead preferring a quiet retirement. However, the game is still in Jose's blood as he has independently worked with Rockies' catcher Yorvit Torrealba and Cardinals' receiver Yadier Molina.

Why I love this card
The two bats on Morales' shoulder. This was a fairly common look during this era and I can remember swinging two bats in practice and the on deck circle. Never mind that I couldn't handle just one bat, but if the major leaguers swung two, then darn it, I was going to swing two also. The two bats almost distracted me from noticing the collar Morales is sporting. What is up with that?

Something else.....
Morales is the uncle of former major leaguer Melvin Nieves who spent a couple of forgettable years as a Detroit Tiger. Nieves remains the only player that I saw to hit a home run so hard that fans moved out of the way of the ball as it landed in the stands.
Posted by Dean Family at 2:36 PM