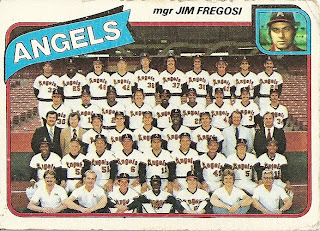 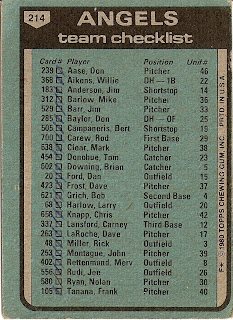 As the 1980 season began, the defending AL West California Angels were faced with a "good news/bad news" scenario. First the good news....

The Angels had 47 injuries in 1979 but were still able to win the division. Granted, the AL West was the weakest division in baseball, but that still doesn't deter from the accomplishment. Don Baylor won the MVP Award and the Angels had two young stars in catcher Brian Downing and third baseman Carney Lansford. Bobby Grich was arguably the best second baseman in the league and they had a future Hall of Famer (Rod Carew) at first base. Dan Ford was a 100-RBI man and despite having off-season knee surgery, the Angels added outfielder Al Cowens and added Fred Patek as a free agent shortstop. On paper they had the best offensive attack in their division.

After eight seasons as the cornerstone of the Angels' pitching staff, Nolan Ryan left the club as a free agent. To replace him, California signed Bruce Kison from the Pirates and were counting on a strong return from Frank Tanana. There were also some concerns regarding their bench depth and left handed hitting, but most publications predicted that the Angels would repeat as division champions. Besides, no team could be unlucky with injuries two years in a row, could they?

The Angels could. Almost immediately, they lost Downing to an ankle injury and Baylor to a series of different problems. Lansford slumped, largely due to little protection in the lineup. Kison was a bust as Ryan's replacement and was also injured. Ford did not recover from his knee surgery and their lack of depth was clearly evident.

Initally the Angels tried to fill the holes by adding Dave Lemanczyk, Dave Skaggs and Jason Thompson. Grich and Carew were named to the American League All Star team and Carew was fifth in the league in batting. However, their pitching woes were too great and only the Indians had a worse team ERA. The Angels finished 1980 with 95 losses and finished a distant sixth in the AL West.

Why I love this card
You can't beat a picture of a division champion. When I got this card early in the season I made a mental note to take good care of it, by summer it didn't matter any more.

Something else....
It appears that Topps is working through the AL West in regard to the team cards. Five of the seven teams in the division have now been covered and the other two are also West teams (albeit NL), the Braves and Astros.
Posted by Dean Family at 9:05 PM