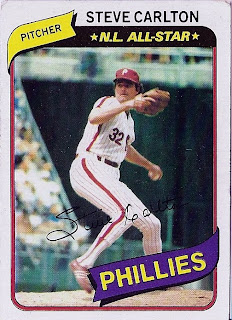 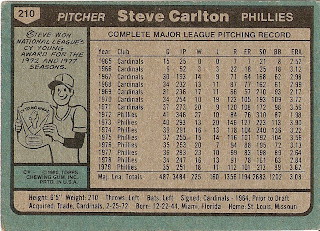 Who is this player?
Steve Carlton, starting pitcher, Philadelphia Phillies
Hall of Fame, Class of 1994
As one of the premier pitchers in baseball, Steve Carlton turned in one of the finest performances of his career in 1980. Not only was he named National League Cy Young winner for the third time in his career, but he helped lead the Phillies to their first World Championship. "Lefty" was clutch in the postseason for Philadelphia, going 3-0, including two wins in the World Series. Carlton led the league in victories, strikeouts and games started and his 304 innings pitched marked the last time any pitcher has topped the 300+ mark in a single season.

Trailing only Warren Spahn, Steven Norman Carlton would eventually become the second-winningest lefthanded pitcher of all-time. He had his beginnings with the St. Louis Cardinals and worked his way into the starting rotation of the great Cardinal teams of the late 1960s. Twice an All-Star with the Cardinals, he appeared in both the 1967 and 1968 World Series. He finished second in the NL in ERA in 1969, and when he won 20 games for the first time in 1971, he asked for a pay raise and held out. Rather than capitulate, the Cardinals traded him to the Philadelphia Phillies.

In that first year in Philadelphia, he had possibly one of the greatest pitching seasons ever. Not only did he win the pitching version of the triple crown (Wins, ERA, Strikeouts), his 27 wins marked 46% of his team's victories is a record in modern major league history. His success was attributed to his mastery of the slider and training regimen that was ahead of its time. He employed martial arts, running and strength conditioning in his regimen but is perhaps best known for working his hand to the bottom of a large canister of rice.

Carlton also became noted for his silence with the media. Upset at some of the things attributed to him, he stopped speaking to the media in 1977 and continued his stance until his release from the Phillies in 1986. During that time, he won three Cy Young Awards, leading the league in victories and strikeouts three times each. He was selected to the All-Star team five more times (10 times total) and started the 1979 game. He won his 300th game in 1983 against the old team the Cardinals and for a time, traded the all-time lead in strikeouts with Nolan Ryan.

Lefty signed with the Giants in 1986 and bounced around to the White Sox, Indians and Twins during the last few years of his 24-year career. In 1987, he and Phil Niekro became the first teammates and 300-game winners to appear in the same game. Steve was selected to the Hall of Fame on the first ballot in 1994 with 95.8% of the vote. He created a brief controversy with some of his comments regarding the Elders of Zion, but he has enjoyed a quiet retirement as a regular at Hall of Famer ceremonies each year. He maintains his own website and continues to make personal appearances.

Why I love this card
During the summer of 1979, my Dad sat me down to watch the All Star Game for the first time. I was instructed to watch the two starting pitchers: Nolan Ryan for the AL, Steve Carlton for the NL. These two immediately captured my attention and imagination. When I got this card during the summer of 1980 (complete with the All Star designation) I knew Lefty was something special. He became a cornerstone of my baseball card collection and it was special to be in attendance at his induction in 1994.

Something else....
When Carlton signed with the San Francisco Giants, much was made of the fact that Lefty was finally going to speak to the media. Dad told me that I should tape it since it was so rare (he never told me to tape something). I still have that somewhere, along with Carlton's appearance on Married...With Children. 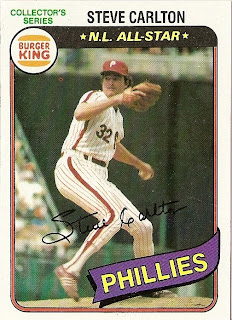 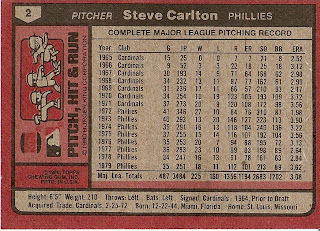