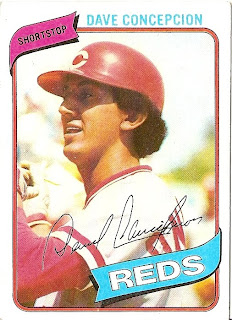 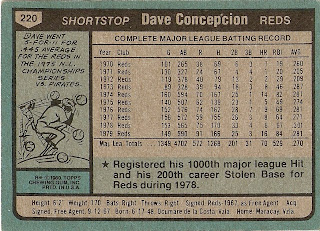 Who is this player?
Dave Concepcion, shortstop, Cincinnati Reds
As an integral member of the legendary "Big Red Machine" at the time of this card, Dave Concepcion was lauded as one of the top shortstops in the National League. He was in the midst of eight straight All Star appearances in 1980, but began the season slowly, batting as low as .210 on June 8th. He raised his average 35 points in less than a month and was selected as a reserve, scoring an insurance run in the NL's 4-2 win. He had four hits in a September game against Chicago, but the Reds faded down the stretch and were unable to successfully defend their division championship.

A native of Venezuela, Dave Concepcion would go on to inspire a generation of future major leaguers that currently dot the professional landscape. Ozzie Guillen, Omar Vizquel and Carlos Guillen have all cited him as a significant influence. However, he was originally drafted by the Cincinnati Reds as a pitcher. He made his major league debut on Opening Day 1970, and spent the next three seasons platooning at short. When he followed a .205 season in 1971 with a .209 performance in 1972, his manager Sparky Anderson had Tony Perez room with and mentor him. It would positively effect the remainder of his career.

He earned the starting position outright in 1973, but a broken ankle ended his season early. Dave was batting .287 at the time of his injury and named to his first All Star team. The Reds would become two-time World Champions in 1975-76 with Concepcion emerging as a solid hitter and yearly Gold Glove fielder. He scored the pennant winning run in the 1976 NLCS and batted .357 during the 1976 World Series. While the Big Red Machine slowly began to dismantle in the late 1970s, Concepcion remained a fixture in Cincinnati.

The Reds returned to the playoffs in 1979 and Dave clubbed a career high 16 homers and 84 RBI. He batted .429 in the NLCS, but the Reds were swept by the Pirates. During the strike-shortened 1981 season he batted .306 and was fourth in the MVP voting, but the Reds missed the playoffs despite having the best record in baseball. The following year, Concepcion was named MVP of the All Star Game due to his eventual game winning home run off of Dennis Eckersley.

In the second half of his career, Concepcion is often credited with originating the practice of deliberately bouncing a difficult throw to first base. The idea is that Dave used this method to take advantage of the artificial turf prevalent in the National League. He began to be hampered by age and injuries and groomed his successor at shortstop, Barry Larkin. His final seasons saw Concepcion become a valuable utility man and he played all four infield positions, even pitching in a game in 1988, the final season of his 19-year career.

Why I love this card
Seeing this card always made me wish we lived in a National League city. Concepcion always seemed so friendly and is pictured here signing autographs. I was convinced that if the Reds played the Tigers, I could get Concepcion's signature. Come to think of it, I still don't have his autograph.

Something else....
Dave (or is it Davey?) is enjoying a quiet retirement in his native Venezuela. Occasionally, he returns to the game; he was the Manager of the World Team at the 2002 Futures Game and in 2007 is #13 was retired by the Cincinnati Reds.
Posted by Dean Family at 9:59 PM