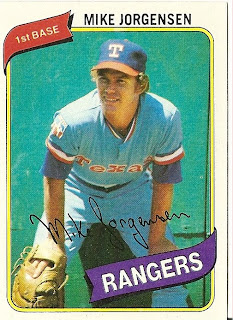 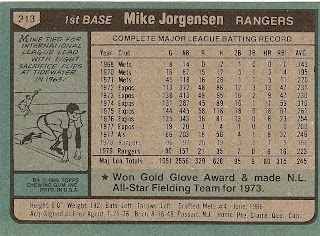 Who is this player?
Mike Jorgensen, first baseman, Texas Rangers
Traded to the New York Mets at the end of the 1979 season, Mike Jorgensen was returning to the National League after two and a half years in American League, most recently with the Texas Rangers. As a Met, the lefthand hitting Jorgensen split time between first base and right field, and batted .255 in 119 games. He had a grand-slam in the bottom of the ninth inning to lead the Mets to a 6-2 victory over the Dodgers in June for his most notable moment of the season.

Born on August 16, 1948, Jorgensen was born on the day that Babe Ruth died. Originally selected by the New York Mets, he made his debut in 1968 as a late-season call-up. Unfortunately, Mike missed the "Miracle Mets" World Championship season the following year, spending the season in the minors. After three years of limited action, Jorgensen, along with fellow prospects Tim Foli and Ken Singleton were traded to the Montreal Expos for Rusty Staub.

Jorgensen was immediately installed as the Expos regular first baseman where he enjoyed the greatest success of his major league career. He was the National League Gold Glove winner in 1973, batted a team-high .310 in 1974 and had career highs in nearly every offensive category in 1975. When the Expos traded for Tony Perez in 1977, his days in Montreal were numbered. The Expos traded Mike to the Oakland A's, where he spent the second half of the 1977 season. The A's did not make an attempt to resign him and Jorgensen caught on with the Texas Rangers.

Midway during the 1979 season, Jorgensen fell victim to a vicious beaning that left him hospitalized and at one point threatened his life. He returned to the Rangers after a month on the disabled list, but never regained his batting stroke and he was traded to the Mets at the end of the season. His beaning was so serious that when Montreal's Bill Gullickson pitched too close inside to Jorgensen in 1980, it prompted a bench-clearing brawl led by Mets' teammate John Stearns.

Mike played with the Mets until 1983 when he was traded to the Atlanta Braves and finally, to the St. Louis Cardinals in 1985. It was in St. Louis that he experienced his first taste of the postseason, in the NLCS and World Series. The final game of his 17-year career would be Game 7 of the World Series, an 11-0 Cardinal loss to the Kansas City Royals. Jorgensen stayed in the Cardinals organization in several capacities, notably as manager in 1995 and most recently as special assistant to the General Manager in 2009.

Why I love this card
There was a kid in my class named "Jorgenson." Don't know how it began, but we used to drive him crazy that he was spelling his name wrong and the only true way to spell it was -en. This card was literally the trump card. Boy, did he get mad. That was the only reason we did it. Kids can be so mean.

Something else....
I had forgotten who the Cardinals manager was before Tony LaRussa, but it was Jorgensen. Interestingly, Jorgensen was sandwiched between two future Hall of Fame managers as he was the interim replacement for Joe Torre when he was fired by the Cardinals.
Posted by Dean Family at 10:05 PM