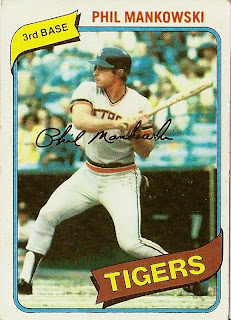 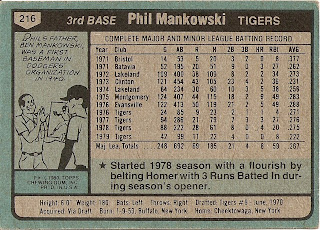 Who is this player?
Phil Mankowski, reserve infielder, Detroit Tigers
On Halloween 1979, the Tigers traded Phil Mankowski, along with Jerry Morales, to the New York Mets for Richie Hebner. Originally penciled in to be part of a Mets platoon at third base, Mankowski developed shoulder problems and was placed on the disabled list. He also contracted a case of hepatitis that wiped out much of this playing time in 1980. In all, Mankowski appeared in only nine games at Triple-A Tidewater and in eight games for the Mets. In limited action, he batted only .167.

A native of Buffalo, New York, the lefthand-hitting Mankowski was signed out of Bishop Turner high school by the Detroit Tigers in 1970. He steadily worked his way up the minor league ladder, winning a championship in 1975 as a member of the Double-A Montgomery Rebels. A solid season at Triple-A Evansville in 1976 earned him the promotion to the parent club and he was given a late-season look. He replied with 5 multi-hit games in approximately a month and would be given a serious look heading into 1977.

When incumbent third baseman Aurelio Rodriguez went down with injury, Mankowski responded with three hits in his first game and batted .316 as his replacement. This created a platoon situation for the remainder of the season that saw Phil bat .276 and achieve career highs in nearly every offensive category. He was the Tigers Opening Day third baseman in 1978 and 1979 but never saw consistent playing time as as a regular. He began 1979 in a batting slump and then missed most of the summer with a fractured hand. With Tom Brookens looming in the Tigers' future plans, he was traded to the Mets.

Mankowski spent all of the 1981 season at Triple-A, unable to return to the major leagues that year. He would play his sixth and final year at the major league level in 1982, appearing in 13 games as a reserve with the Mets and batting .229. Phil appeared in the 1984 film "The Natural" as New York Knights third baseman Hank Benz. You can see Phil mainly in the National Anthem scene when all of the players were sporting the "Wonderboy" patches. Phil was hired for the movie since most of it was shot at War Memorial Stadium in his native Buffalo.

In recent years, Phil has been a coach to his daughter's high school and travel softball teams and is a member of the Greater Buffalo Sports Hall of Fame.

Why I love this card
Remember the batting average listings in the Sunday newspaper? After Mankowski left Detroit, I would look for him once in a while in the Sunday paper. I had no idea about his injuries in 1980 and thought he dropped off the face of the earth. This card was the only evidence that I had that Mankowski was still a major league player. Information was so much harder so come by in those days, I guess.

Something else....
Mankowski shares a birthday with a eclectic group of people. Lee Van Cleef. Gypsy Rose Lee. Fernando Lamas. Bob Denver. Bart Starr. Jimmy Page. One that caught my eye was also Crystal Gayle. My Dad had a bunch of her records (yes, records) and her hair always creeped me out.
Posted by Dean Family at 9:27 PM